‘Here they come;’ seizures of IDs and property make it hard to keep your head above water, advocate says

‘Here they come;’ seizures of IDs and property make it hard to keep your head above water, advocate says

Richard Murray writes in the shade at Wells Park on Sept. 16. Moments later, Albuquerque police officers kicked him, his girlfriend and three others out of the park. (Photo by Austin Fisher | Source NM)

Richard Murray writes in the shade at Wells Park on Sept. 16. Moments later, Albuquerque police officers kicked him, his girlfriend and three others out of the park. (Photo by Austin Fisher | Source NM)

Richard Murray and Terryn Paul both like to draw.

Sitting on the grass at Wells Park near Downtown Albuquerque on Sept. 16, they read books, smoke cigarillos and sharpen colored pencils using a knife with a pearlescent handle. They’ve been living unsheltered on the city streets for five years, repeatedly missing chances to get housing.

The couple and three other people rest in the shade this afternoon, with temperatures in the city reaching 90 degrees.

Fewer unsheltered people come to this park now, they say, after city workers and police swept the park on Sept. 8, the latest round in a series of camp sweeps at parks across the city.

Murray and Paul were there that day. The sweep displaced about 15 to 20 people, who are now scattered throughout the neighborhood, they said. One family now stays at a cement lot a couple blocks away, while an elderly man they call “grandpa” stands in the sun against a wall nearby, he said.

Police didn’t take any of Murray or Paul’s things, but they did take property from at least two other people who were at the camp, they said. Police didn’t arrest anyone, Murray added, but they might have cited people. Police always warn them about citations, he said.

“I don’t care what they say. They can arrest me as many times as they want. I’m using this park the way it’s supposed to be used,” Murray said. “I’m not doing anything wrong.”

A lot of people stay away from Wells Park now, Murray said, because they were getting arrested for “the smallest things.”

“They were specifically targeting here,” Murray said. “They said if they wanna get somebody on a warrant, they just wait at Wells Park.”

Police and city workers continue to sweep unsheltered people from parks, sometimes arresting them, citing them for trespassing or loitering, taking their property and even their identification, sources said. The sweeps happen despite federal guidelines recommending against doing so, because they create an increased risk of spreading COVID-19.

Advocates said breaking up camps is cruel, puts people’s lives at risk and results in people losing all of their possessions.

“If individual housing options are not available, allow people who are living unsheltered or in encampments to remain where they are,” the Centers for Disease Control and Prevention stated. “Clearing encampments can cause people to disperse throughout the community and break connections with service providers. This increases the potential for infectious disease spread.”

“If anything, in recent weeks, they’ve been moving people a lot more,” Murray said. At one point, Paul said, they moved the couple three times in one day.

“Where do you expect us to go?” Paul said. “What else do you want from us?”

City spokesperson Gilbert Gallegos wrote in a Sept. 15 email that a city official was checking into a list of questions about the Wells Park sweep sent by Source New Mexico. By press time, no one had provided answers about how many people were caught up in the sweep, whether anyone was arrested or cited for alleged crimes, or whether the city takes into account the CDC guidelines.

Gone in a blink

The early September camp sweep is not the first time Murray has been caught up in one. It’s also not the first time in recent months Albuquerque has cleared camps, nor is Wells Park the only place in the city where the sweeps happen.

About a month ago, Gugumby Bibbings left his belongings at Phil Chacon Park in the city’s Trumbull neighborhood to work at the Compassion Center a couple blocks away. When he returned, his property was gone, and the other campers told him the police took it and threw it away.

“Some of the stuff, I’d had forever, and just in a blink, it’s all gone,” Bibbings said. “Papers, documents — everything’s gone. They really don’t care.”

Originally from Philadelphia, Bibbings said it’s extremely difficult to get his vital records from Pennsylvania to New Mexico.

Joanne Landry, a pastor who runs the Compassion Center, said camp sweeps are pretty common in the city. Police take people’s tents and throw them into trash trucks, she said, and they cite some people for breaking the law, presumably for loitering or trespassing. Camping is illegal in the park.

Landry said the situation is a Catch-22.

In a matter of moments, it’s all gone. So they’re getting really frustrated. I understand that part of the city, but then at the same time, I also see when people are in despair, because everything’s been taken.

The point of the lawsuit was that police were arresting and incarcerating so many people, the local jail was severely overcrowded. So the settlement was meant to reduce the number of people in the jail. To that end, it also prohibits Albuquerque police from even asking for identification if they have reason to believe that the person is mentally ill or homeless.

Pastor Landry said cycles of repeatedly losing property is why she is working with the New Mexico Coalition to End Homelessness to get people into housing. If someone qualifies, they can receive housing vouchers for up to nine years, she said.

Paul said she and Murray didn’t aspire to be homeless, it just happened. Research shows losing access to one’s personal identification creates even more difficulties in accessing health care and other social services.

Once you start to drown out here, you can't get your head above water.

Unlike other shelters in the city that are closed during the day, the Compassion Center offers a place for people to rest during the day and does not ask them to move along unless there’s violence, which is rare. They offer outdoor showers, hot food, snacks, drinks, an outdoor sanctuary and a beauty center. They feed about 100 people per day, she said.

After the most recent sweep of Wells Park on Sept. 8, city officials built new fencing along the east side of the community center, blocking anyone from sitting in the shade beneath the trees along 5th Street. People were getting high on that side of the building where security cameras can’t see, Murray said.

Jose Martinez, an employee of the city’s Family and Community Services Department, told the Wells Park Neighborhood Association that the fencing is meant to prevent people from camping in the park.

There had been several incidents around, inside and on top of the building in the past few weeks, Martinez told members of the association during their Sept. 14 meeting. He said there was damage to the air conditioning units on top of the building. He did not say whether it was people experiencing homelessness who did it.

Martinez said the city installed signs around the public park prohibiting anyone from being in the park from 7:30 a.m. to 6 p.m. unless they are attending a specific program organized by the community center. He said the signs give police “the authority to be able to have people removed out of the area.”

“The fencing is a— it’s not a permanent thing, from my understanding. It is more of a few months type of thing to see if we can start to eliminate people from being there,” he said. The fencing also gives city workers time to speak to people and ensure they get access to resources like motel vouchers, he said.

Murray, Paul and other people are sitting in the grass giving interviews. “Here they come,” someone says. At the edge of the park by the entrance to the community center, Martinez meets with a large group of Albuquerque police. Moments later, the police split into pairs, walk up to the unsheltered people and tell everyone to leave.

The people gather their things, throw away their trash and protest, saying they have a right to be in a public park.

“We’re just coming out, offering them services, and asking them to please leave, because we’ve talked to the responsible party here [Martinez], that they’re not using the park in the right way,” Albuquerque Police Sgt. Daniel Howie says. “If they choose to not leave, we come back later, we may cite or arrest … probably not arrest, because they’re not doing anything violent.”

Howie says Martinez told him the unsheltered people “weren’t members of the community center, they weren’t using any of the services there.”

“I never thought that this park would become members-only,” Murray tells the officers.

An officer tells Murray the park isn’t members-only all the time, just from 7:30 a.m. to 6 p.m. each day. Howie says lots of children come to the park, and the police are trying to ensure they have a healthy and safe atmosphere there.

“But that’s making the assumption that because we’re homeless, we’re going to make it unsafe for them,” Murray says. “That’s unspoken, but that’s what they’re saying. They’re going to use word games to kick us out of a public place that they don’t want to look at us, and they don’t want the children to see us.”

Murray, Paul and the others walk north along 5th Street away from the park, searching for a new place to escape mid-afternoon heat. 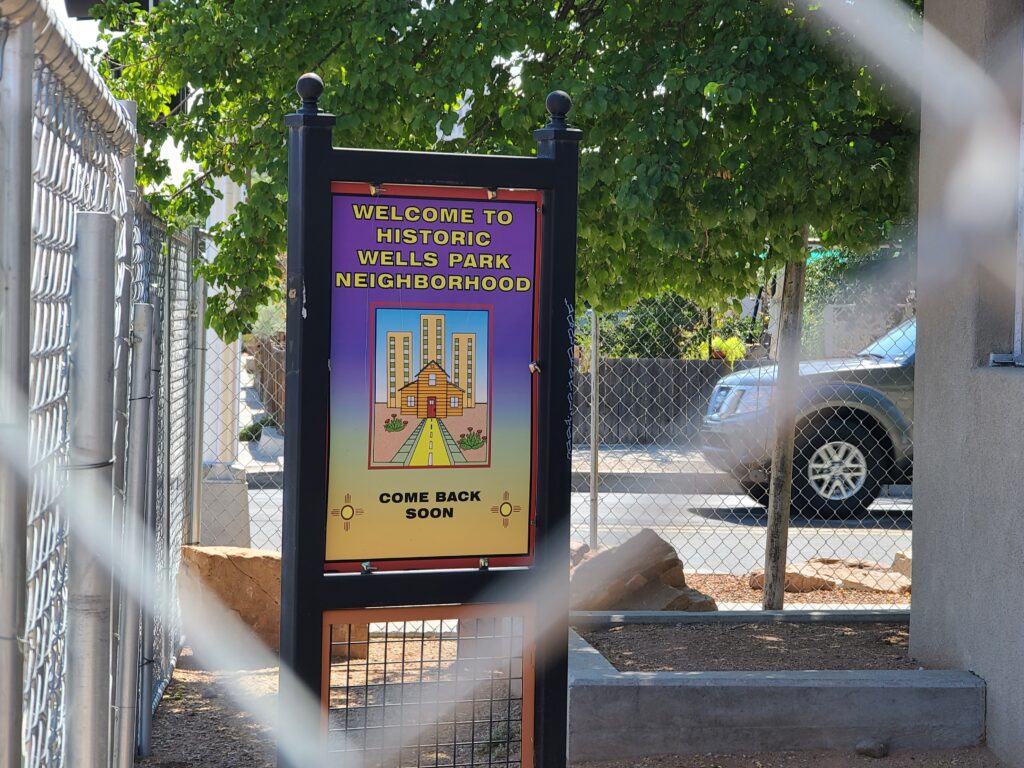 Memory of a River: In another hot year, we fail the Rio… by Laura Paskus September 18, 2021
Straddling the divide between environmental action and… by Isabel Koyama February 28, 2022
‘We’ve got to get gaming out of our blood’ by Mario Koran, Wisconsin Watch/WPR April 6, 2022