Cree Walker, right, and her family have a Section 8 voucher but in late September had been unable to find a landlord who would take it for months. So they had to cram into this extended-stay hotel room and feared being kicked out any day. Pictured are Walker with mom Renae Simonson, along Walker’s kids Gabriel, 12, Castiel, 7, Azariah, 6, and Renesmee, 5 in September 2021. (Photo by Patrick Lohmann / Source NM)

Cree Walker and her family have a roof over their heads for at least the next couple weeks. If things don’t work out at her extended-stay hotel, she said, it’s hard to see where they’ll find shelter next.

She assumed it would be much easier to find a place. She moved to New Mexico in July from Idaho with her four kids, all under age 12. She carries a Section 8 voucher, which means the federal government will pay most of her rent every month to whichever landlord gives her a place to stay.

I don't understand why they're not willing to take it. I mean, at least you wouldn’t have somebody that was fired, not able to pay rent and living there for free.

Walker figured a landlord would welcome the stable income her voucher provides, especially amid a pandemic that has meant many landlords lost rent income and are unable to evict their tenants for failing to pay.

But several landlords rejected her, she said.

New Mexico is one of 19 states where it is still legal for landlords to reject a tenant based on how they’re paying rent, be it a Section 8 voucher, a Veterans Affairs benefit or some other subsidy, according to the National Multifamily Housing Council.

Walker is not alone in being unable to use her voucher. Albuquerque and Santa Fe Craigslist pages, for example, have several ads daily from would-be tenants frustrated that they can’t find a place. They’re often alongside even more ads from landlords where Section 8 is not accepted.

“No one wants to rent to good, hard-workin folks & guaranteed rent?!” someone titled a post on Albuquerque’s site about a month ago. “Is there anyone out there willing to accept our Section 8 voucher? Our family has been searching tirelessly for over a month!”

Until Walker can find a place, she, her disabled mother, her four kids aged 5 to 12 and their three dogs are crammed in a room at Siegel Selects extended-stay complex on University Boulevard.

They’re struggling to come up with the $300 a week it costs to live there. That is more than many market-rate apartments and way more than she’d pay with her voucher, which limits her contribution to 30% of her income.

And a similar practice — refusing to accept money from the state’s Emergency Rental Assistance Program — is undermining the goal of that $170 million program and forcing more people out of their apartments and onto the streets, she said.

“Where can these folks go if they receive a subsidy, but so many landlords refuse to house them because of their status financially?” said Romero (D-Santa Fe).

A roof, for now

Walker doesn’t know where she’ll go, she said. She often passes by a homeless encampment near her complex. She always tries to give people there water or food if she can. She said she doesn’t expect she’ll end up there, though she does have a tent in her van, if needed.

As of last week, she was a week late with rent at Siegel Select, and the manager threatened to lock her out, she said. She called the New Mexico Center on Law and Poverty, where she got help applying for the state’s Emergency Rental Assistance Program.

The program typically pays landlords on behalf of tenants for up to 12 months of owed back rent and three months of future rent. Tenants can get the money if they earn under an income limit and if they can show the pandemic cost them financially.

In Bernalillo County, the income limit is $55,300 for a household of four.

While the application is pending, things have calmed down for her, she said.

“(The property manager) said as long as I’m working with him and talking to him, communicating to him how my rental assistance application is going, he won’t kick me out,” she said.

But she doesn’t yet know whether she’ll receive any money from the program. And there’s no guarantee the complex owners will even accept the cash if it’s awarded. They could refuse and still kick her out.

After all, turning down the rental assistance money is somewhat common among New Mexico landlords.

Landlords either refused emergency relief money or didn’t respond when contacted by the state offering to pay someone’s rent around 2,000 times during the pandemic, according to numbers the Department of Finance and Administration provided to Source New Mexico.

If a landlord refuses the money or can’t be contacted, the money is paid instead to the tenant directly, according to DFA.

The amount of money landlords refused comprises 20% of the amount that’s been distributed as of Wednesday through the Emergency Rental Assistance Program, said DFA spokesperson Henry Valdez. DFA administers the rent assistance program. 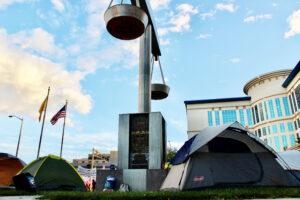 RELATED: Shadow evictions: Illegal lockouts rise in NM during the pandemic despite a state law aimed at preventing them  (Sept. 27, 2021)

The state gave out about $44 million in rent and utilities as of Sept. 23, according to ERAP director Donnie Quintana.

But even though a tenant might get rent money directly from the state program to cover their rent, it doesn’t mean they’ll be able to find housing easily, Romero said — especially if a tenant’s landlord proceeds filed for an eviction in court anyway.

“​​An eviction on their record makes it really hard for them to find other housing,” she said. “So it just kind of snowballs into this very difficult situation.”

Tenants who lost income due to the pandemic are regularly legally still evicted, even though they qualify for rental assistance. Under the law, landlords can evict tenants for reasons other than failure to pay rent. For example, landlords can choose not to renew a lease once it’s expired or come up with a reason a tenant violated the lease, said Maria Griego, an attorney at the New Mexico Center on Law and Poverty.

But why would a landlord leave thousands of dollars from the state on the table?

For one, it’s a shrewd financial choice amid current market trends, Griego said.

Landlords are also required to fill out tax documents if they receive money from the state, which Griego said might discourage some sketchy property owners.

“We’ve heard from landlords who don’t want to fill (it) out for tax reasons,” Griego said, “which kind of suggests that they’re not reporting all of their income.”

And landlords are required to fill out a “letter of intent” that states they will not evict a tenant if they receive state rent money, though it wasn’t immediately clear how binding that letter is or how long it lasts. 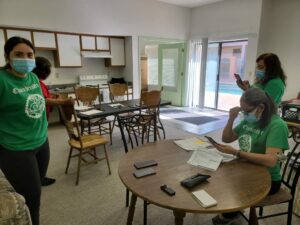 The state is not keeping data on exactly how many landlords refuse rent or why, Quintana said. The state pays tenants directly if landlords don’t respond to three contact attempts over seven days, he said.

Without responses, the DFA doesn’t know if there are common reasons landlords refuse to accept rent money from the relief program.“We are focused on working with landlords and property management companies that want to participate,” he said, “and we’ve had success in paying over $44 million in rent and utilities on behalf of New Mexicans across the state.”

Romero and Rep. Angelica Rubio (D-Las Cruces) sponsored House Bill 111 during this year’s legislative session, a measure that would have made “source-of-income discrimination” illegal. The bill defined “source of income” as Section 8 “or any other form of housing assistance payment or credit, whether or not such income or credit is paid or attributed directly to a landlord and even if such income includes additional federal, state or local requirements.”

The bill failed in the Senate, which Romero attributed to a packed schedule. She intends to submit it again, she said, likely if Gov. Michelle Lujan Grisham calls a Special Session.

“We’ll keep pushing,” she said. “But we’re hopeful that we’ll see something in the Special Session to help with this crisis.”

St. Mary's Mission: ‘This place is the Devil’ by Mary Annette Pember, Indian Country Today October 14, 2021
These Single Moms Are Forced to Choose: Reveal Their Sexual… by Eli Hager | ProPublica September 22, 2021
Her daughters are U.S. citizens. Title 42 won’t let this… by Uriel J. García, The Texas Tribune May 19, 2022