Airmen from Task Force-Holloman and Afghan evacuees talk outside one of the living quarters at Holloman Air Force Base in New Mexico on Sept. 4, 2021. (U.S. Air Force photo by Staff Sgt. Kenneth Boyton)

Tens of thousands of Afghans will have their first real glimpse of the U.S. at hastily constructed encampments on military bases across the country with active-duty soldiers overseeing operations.

The sandy, jet engine-raked Tularosa Basin is now one of those official entryways for scores of Afghans, many of them children, who had to flee their homes last month. Holloman Air Force Base outside of Alamogordo was activated as part of “Operation Allies Welcome” and the whirlwind U.S. military withdrawal from Afghanistan. 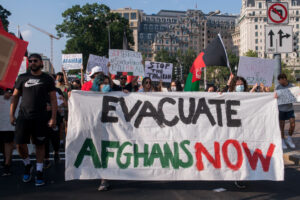 U.S. military has left Afghanistan; evacuation of Americans and Afghans moves into next phase (Aug. 31, 2021)

Officials and direct service agencies in New Mexico were informed at the end of last week that 299 of the evacuees staying at military bases across the country have been slated for protective resettlement here, pending approval of their U.S. visas.

At the time of this article’s publication, state officials and staff at the state’s lead resettlement agency, Lutheran Family Services in Albuquerque, had been instructed by federal authorities to prepare for the first four families’ arrival sometime in the next few weeks, with up to 30 families projected to arrive within the next year. One family with children is being vetted at Fort Lee in Virginia, while several others are now undergoing the same stringent U.S. government requirements at Holloman.

From the moment they set foot here outside of a military base, Afghans who have been granted special visas face a strict 90-day deadline before their basic federal assistance expires. Resettlement agencies like LFS only get about 48 hours of notice from federal officials before they greet new arrivals at the airport and begin resettlement services.

It’s with similar urgency that Farid Sharifi, the program coordinator at Lutheran Family Services, feels called to correct misinformation and misconceptions about new arrivals, all of whom undergo extensive medical and background checks before they’re permitted to begin their lives in the U.S. 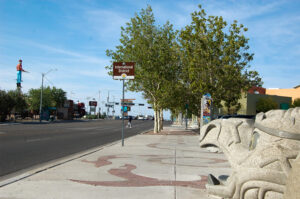 There are many Afghans already well-established in New Mexico, Sharifi said. “They are in the medical profession. They’re business owners, civil engineers, biochemists and everything in between. They’re embedded in our community, working hard and giving back.”

Sharifi feels confident saying that New Mexicans are known for their outpourings of positive support for new arrivals from other countries. He described responses from locals since the U.S. military withdrawal as “overwhelming.”

Appropriate community support will be essential. Migrant resettlement efforts have always operated under the good graces of private donors and tight budgetary constraints of public funding. Four years under the administration of ex-President Trump created new hardships for direct service organizations that help newly arrived refugees and asylees. Trump opened his term with the “Muslim ban” executive order, prohibiting entry of refugees from Syria and seven other Muslim-majority countries. While the ban was struck down under court order, new administrative delays and even stricter protocols for how refugee, asylee and special visa applications are approved slowed the U.S. immigration system to a crawl.

In 2020, the number of people approved for resettlement dropped to the lowest level since 1980. Onset of the pandemic prompted monthslong cancelation of even approved arrivals. Only 4% of Iraqis permitted in 2020 to resettle in the U.S. — on the same basis as many of the newcomers from Afghanistan — were actually admitted, ABC News reported in October.

Refugees in Albuquerque holding out hope for their Afghan family members (Sept. 8, 2021)

Sharifi said his agency was lucky to avoid cutbacks in staff that other resettlement services were forced to undergo. “Upon welcoming (Afghans) into our communities, the process of resettlement will exactly mirror what we’ve already been doing for a long time: securing them housing, getting them jobs, job training, ESL, helping with school enrollments, financial literacy, business education,” he said. “We welcome new partnerships and community members who can volunteer, mentor, tutor, or who want to contribute monetarily to basic needs.”

The military bases where Afghan evacuees live as they undergo vetting for resettlement approval are fenced off from the public, including most media. On Friday, Gov. Michelle Lujan Grisham and her chief of staff were granted a 90-minute tour of the encampment set up for Afghans at the U.S. Army’s Fort Bliss, which is in New Mexico and Texas but headquartered in El Paso. Volunteers at the site told Lujan Grisham that as colder weather hits, evacuees will need winter clothing and other supplies, as well as English-language education for adults and children, according to an emailed statement from the Governor’s Office.

Denise Ottaviano, a spokesperson at Holloman Air Force Base pointed to news releases out of the facility that show what the military calls a “village” for evacuees constructed on site that includes food provisions and designated space for religious observances. A recent movie night featured Disney’s “Toy Story.”

Two spokespeople for Holloman’s joint operation responsible for living conditions at the village did not respond to questions about how military personnel or civilian contractors who work on the base ensure their interactions with evacuees are safe, respectful and humane. Previous statements to local media said public health protocols are enforced inside buildings on military installations and federal officials meet daily with evacuee residents.

Back in Albuquerque, Sara Deewa is a community leader and program coordinator at United Voices for Newcomer Rights. UVNR is staffed by locals who were themselves refugees from Iraq, Afghanistan, Burundi and the Democratic Republic of Congo, and they know the road ahead for families like those at Holloman is a rocky one. Deewa said her concerns for soon-to-arrive Afghans are centered on essentials.

New arrivals admitted to the U.S with refugee status have historically received at least some long-term federal support from the federal Office of Refugee Resettlement after the first 90 days of immediate funding for assistance expires, said Deewa. Because many Afghans in this newest wave of arrivals are eligible for special immigrant visas with parameters that differ from those with refugee status, they are not eligible for the same kinds of integration assistance.

“In the conditions they left their country, they develop mental health issues, and they are not at peace,” Deewa said.

It is very hard to get resettled in just three months, to find a job, to get paperwork sent in, learn English, get familiar with the system. It’s very hard.

She said UVNR and its community partners are strategizing how to fill potential gaps in existing resettlement services. Some new arrivals will be eligible for the University of New Mexico Hospital’s Pathways program, which partners with Bernalillo County to help newcomers enroll for assistance with affordable housing, education, health, transportation, early childhood education and legal issues. If Afghans don’t qualify for those services, UNVR is also preparing a mentoring program meant to assist with similar needs.

On Monday night, Republicans in the U.S. Senate voted down a House-backed measure that would have kept the federal government open through December while also providing emergency funding for Afghan evacuees. Among 48 Democrats voting in favor of the funding was New Mexico Sen. Martin Heinrich, who said in a statement that his office “worked day and night to make sure we got as many U.S. citizens, aid workers, and Afghan allies and families out of Afghanistan before American forces exited.”

“I will not allow this nation to turn our backs on the Afghans who helped us over the past 20 years and are counting on us now,” he added. That includes making sure bases in New Mexico remain prepared to receive refugees, and provide health and safety resources.

Sharifi at LFS expressed his own determination to help new arrivals, “so they can put their lives back together and not just survive but really thrive.”

Margaret Wright is a freelance journalist whose previous work has appeared at the Santa Fe New Mexican, New Mexico Political Report, Santa Fe Reporter, KUNM News and Popula, among other local outlets now shuttered. Homesickness besets her if she’s outside of the high desert for too long.

Straddling the divide between environmental action and… by Isabel Koyama February 28, 2022
Renewable Energy: Jobs of the future by Ted McDermott, InvestigateWest April 8, 2022
Memory of a River: In another hot year, we fail the Rio… by Laura Paskus September 18, 2021