2021 Indigenous Peoples’ Day set to be the biggest to date

After physical distancing and COVID, people gather online and in-person to begin a new era and reject the colonial narrative

Zuni Knifewing touches the drum after performing a memorial and honor song in late September for the people lost to early boarding schools in the U.S. On Monday, Oct. 11, during Indigenous Peoples’ Day events on Civic Plaza in Albuquerque, as a result of actions by Indigenous organizers and stakeholders, the mayor will sign a resolution formally recognizing the burial ground for Indian School students. (Photo by Sharon Chischilly for Source NM)

The future is Indigenous.

“Indigenous arts, culture, food and everything is literally the backbone of the economy of Santa Fe as the state capital,” Castro said. “The whole identity of New Mexico itself is also wrapped around Indigeneity, so really highlighting our excellence, our cultural resilience, our adaptivity, our survival.”

Celebrating colonial narratives is pre-COVID. It's a new era now.

Their event at Reunity Resources, a local agricultural space that is a neighbor to the farm set up this year by Three Sisters Collective, is one of many events taking place Monday, Oct. 11, across New Mexico.

Many will celebrate a three-day weekend, and many will be celebrating everything Indigenous at events in Albuquerque, Santa Fe — and every other corner of the state.

In 2019, New Mexico established a law declaring every second Monday of October to be celebrated as Indigenous Peoples’ Day. Thirteen states and dozens of cities have rejected the holiday listed on the federal calendar as Columbus Day to instead honor Indigenous people from across the world. South Dakota replaced it with Native American Day, and many tribes in Oklahoma have done the same.

This year’s Indigenous Peoples’ Day is expected to be the biggest celebration in New Mexico to date.

The city of Albuquerque has an entire day filled with happenings at Civic Plaza, including the signing of a resolution by Mayor Tim Keller officially recognizing the city’s traumatic past with federal Indian boarding school policies.

The collective Red Nation was part of a Native coalition that led the effort for New Mexico’s largest city to recognize Indigenous Peoples’ Day in 2015. The organization will conclude a weekend of seminars with a march around Old Town plaza starting Monday at 5 p.m.

“We rally at Central and Lomas. And that’s where the march begins and then we’re going to march through Old Town to Tiguex Park,” Red Nation organizer Jennifer Marley said.

Marley (San Ildefonso) said Red Nation will kick off their celebration on Saturday, Oct. 9 with a Zoom seminar hosted by tribal elders and a youth seminar discussing issues later that day. On Sunday, Oct. 10, the group will host another web seminar, this time focusing on international solidarity with Indigenous people from around the world.

“We know that elders have already had a lot of the experience organizing that maybe we haven’t had or we’re just experiencing for the first time,” Marley said. “And so we wanted to just hear some wisdom from them based on their experiences.”

Back to Santa Fe, the city is hosting multiple traditional singers and dancers for performances on the plaza every day this weekend. On Monday, the Institute of American Indian Arts will open its museum for visitors and conduct several discussions about Native American people in the Southwest.

A storyteller event hosted by Albuquerque artist Cactus Eddie (Isleta) will be part of the IAIA celebration. Eddie is an employee at the IAIA Museum of Contemporary Native Arts. He jumped at the opportunity to share stories from Isleta Pueblo.

“I have been telling the stories my tribe has been publicly sharing for years, to my fellow coworkers,” he said. “When the idea for events for Indigenous Peoples Day arose they asked if I would be interested in storytelling and I immediately said yes. The stories I’ll be sharing are different types of creation stories. Why the evergreens stay green year round, why the fawn and coyotes are always at war, and stories of morals, like why you should never pretend to be who you truly are not.”

The Native American-run KIVA Club will bring back an Indigenous Peoples’ Day event to the University of New Mexico. KIVA Club hosted one the first celebrations back in 2015.

“It’s important to have these bigger celebrations, because you know there are people who are trying to reconnect to their Native roots, which I think is really awesome,” KIVA Club co-president Chenoa Sippio said. “And if you don’t see people who kind of look like you or people who are proud to be Native, how can you be proud of yourself?”

Sippio (Diné / Santa Clara) said the event is important to create space for Native American students on campus and provide insight on the community for non-Native students. 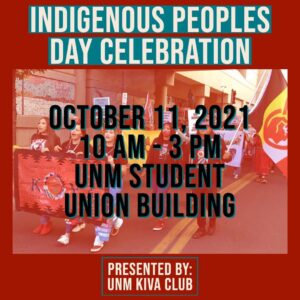 “There are still people to this day who think that Native people are extinct or we only exist in romanticized times like Pocahontas or just in snippets of history that they’re hearing,” she said.

All of this is to say that there is no shortage of ways people can celebrate Indigenous communities locally and across the world. The advent of this celebration is in part done for awareness but also to firmly create spaces for Indigenous people by Indigenous people.

“It’s enough that Native people feel seen and appreciated,” Marley said, “not only that but acknowledgement. I also think it’s a way to galvanize popular support for a lot of other issues. On Indigenous Peoples’ Day, we bring attention to a lot of other things that are impacting Native people that might not be getting a lot of visibility.”

Issues such has support for unhoused populations, missing and murdered relatives, police brutality, the long impacts of boarding school traumas and monuments to colonial structures that support Native American genocide are some of the topics that will be brought up during the events.

There is also a point to recognizing the impact COVID-19 has on Native American populations and how these events are a way to bring back community to the public.

Eddie said it’s important for Natives to participate in all events celebrating Indigenous culture. “This pandemic has not only shut down our cities and reservations, but also our traditional practices,” he said. “We’ve seen a slight resurgence of that however. It’s still not back to full community participation.”

Kiera Lasiloo (Zuni / Cochiti) is an artist that does graphic design and creates traditional clothing for ceremonies at her company The Pueblo Stitch. Her family will participate at the Three Sisters event, their first in-person event since COVID.

Kwani Lopez (Pojoaque) is another artist that will be set up at the Three Sisters event. She echoed the need for these events as the community comes closer together again and recently participated in an art event hosted by her Pueblo.

“I participate every year in my Pueblo. So when COVID started, it was really hard for me, because I didn’t have a place to kind of learn about my culture and just feel connected,” she said. “It was really great to get out there for one of the very first times and just see people, and see people I haven’t seen in a long time. So it was just a really great get-together for artists and family.”

Castro recognizes the importance of hosting these events as Indigenous leaders, and doing so with allies like Reunity Resources strengthens the overall community. She said Three Sisters has been targeted in the city as being a radical organization, something Marley said Red Nation faces, too.

“I think we just want to highlight the excellence that we embody as a collective, as well as Indigenous excellence in the city, because we definitely feel like we’ve been targeted and labeled in ways that we would never necessarily ascribe to ourselves,” she said. “If part of our work is activist in nature, so be it, but we do a lot of other work as well.”

Castro said the event on Monday will also highlight the work done establishing their farm and art space on the southside of Santa Fe that has become a beacon for Indigenous people to congregate, learn and practice their culture away from a tourist gaze present on the Plaza.

“We need to create spaces that can hold all of the multiplicity of our existence. The beautiful, the terrible, the ugly, the rage, the beauty, the pain — and we can’t do that in the Plaza, we can only dance and smile and sell our curios on the floor. So that’s why we have to create new spaces for ourselves that are bigger than the liminality of American Indian identity.”

The city is hosting traditional songs and dances at the Santa Fe Plaza each day this weekend.

Special keynote panel by members of The Red Nation

More on the march.

The iconic Albuquerque home for the 19 Pueblos in New Mexico will have a celebration with tribal leaders and performances from five different dance groups representing Indigenous people from across the state.

Cactus Eddie will be doing his storytelling at 2 p.m. A list of speakers and events can be seen on their website.

Hosted by The Three Sisters Collective

2021 Indigenous Peoples’ Day set to be the biggest to date

Shaun Griswold is a journalist in Albuquerque. He is a citizen of the Pueblo of Laguna, and grew up in Albuquerque and Gallup. He brings a decade of print and broadcast news experience. Most recently he covered Indigenous affairs with New Mexico In Depth. Shaun reports on issues important to Native Americans in urban and tribal communities throughout the state, including education and child welfare.

These Single Moms Are Forced to Choose: Reveal Their… by Eli Hager | ProPublica September 22, 2021
Memory of a River: In another hot year, we fail the… by Laura Paskus For The Santa Fe Reporter September 18, 2021
Prison Rat by Austin Fisher September 28, 2021