‘It’s your gun. It’s your responsibility.’

In August, 13-year-old Bennie Hargrove was fatally shot by a fellow 8th-grade student at Downtown Albuquerque’s Washington Middle School. Newly appointed Rep. Pamelya Herndon said if the parent of the shooter had kept his firearm secure and inaccessible, Hargrove wouldn’t have died that day.

“If the gun that was used to shoot Bennie Hargrove six times could have been kept in a safe location, away from the little boy who did the shooting, then this tragedy could have been avoided,” she said.

Herndon said during the town hall last week that she’s hopeful that gun-safety legislation will be considered during a fast-approaching 2022 legislative session. The 30-day session will otherwise be devoted to state budget matters, and anything outside of that must be approved by the governor before it can be acted upon.

Under a proposed gun storage bill co-sponsored by Herndon, a gun owner would be guilty of a misdemeanor if their firearm was used by a minor in the commission of a crime not resulting in death. However, if the crime results in the death of at least one person, the owner of the firearm would be charged with involuntary manslaughter — a fourth-degree felony.

Bob Carleton, the chair of the Foothills Community Policing Council, summarized the proposed law as “it’s your gun, it’s your responsibility.”

“If your gun is stolen in your house, then it’s your responsibility to report this and to demonstrate during that report how it was secured in the house,” Carleton said. “If it was left on the coffee table in front of the picture window,” he said, then the courts would determine if that met the criteria of a reasonable level of responsibility.

The measure, according to Herndon, is intentionally silent on how to secure the firearm and would leave it up to the courts’ discretion to determine — based on each individual circumstance — if the firearm owner made a reasonable attempt. 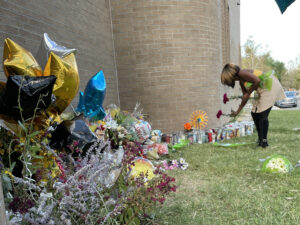 Herndon talked about the economic and social effects of the COVID-19 pandemic exacerbating strained home lives for Albuquerque’s children at the town hall last week.

Yvonne Garcia, the APS chief of schools, said the state’s largest school district hasn’t yet come out with a formal statement of support for Herndon’s proposed legislation, but she personally supports such a gun storage measure.

“I think this legislation will help,” Garcia said in an interview after the town hall.

In addition to state legislation, panelist Deborah Marez-Baca, a member of the gun-safety advocacy organization Moms Demand Action, said her group has been working with the board of Albuquerque Public Schools to include a safe storage agreement in the annual back-to-school forms that every parent is asked to sign.

The purpose of the agreement would be to educate parents about proper gun storage and their obligation to safely secure any firearms in their home. Parents would be required to sign a letter each year acknowledging their understanding of their firearms storage responsibilities, Marez-Baca said.

“The numbers for how many children are in homes with unlocked unsecured guns is astronomical,” Marez-Baca said. “We say that it’s not an accident — this is something that’s completely preventable.”

Both Phoenix Union High School in Arizona and the Los Angeles Unified School District have passed similar policies, according to NBC News.

The APS administrator didn’t weigh in on the safe storage parent agreement form.

“I don’t have my chief of police, the chief operations officer — those questions are better (directed) toward them,” Garcia said after the town hall. “They get involved with that level of policy.”

Albuquerque made national news earlier in 2021 for its record-breaking homicide rate, according to the New York Times.

In September, 83 murders had been reported in the city this year for a rate of 14.7 per 100,000 people. Albuquerque is expected to surpass the previous homicide record by the end of the year, adjusting for population growth, according to KOAT.

“I would like a home visit for every child that’s in our public school system. The higher-paid officials in our APS system need to be going to places like Singing Arrow so that they can see how families are trying to put food on the table and how they’re trying to keep their kids safe,” she said. “All of our kids, all of our families deserve that.”

Byron Powdrell, a former Community Policing Council member and City Council candidate, said he’s been on a few eye-opening ride-alongs with the Albuquerque Police Department and agreed with Lange, because the number of calls for service exceeded APD’s ability to respond during the 12-hour shifts he spent in a squad car.

Powdrell suggested that, alongside the new Albuquerque community-safety department that enables social workers and retired law enforcement members to respond to mental health calls, providing firearms to firefighters and having them respond to some of the calls for service at APS might help alleviate the backlog.

“There’s other cities where their fire departments cross-train with their police departments, so that some of their firefighters can be armed and can take calls,” Powdrell said.

Powdrell said he didn’t think armed firefighters would be responsible for as many shootings as police officers are on the job because, he said, those who want to be firefighters are drawn to the profession to save lives.

“Their job encompasses a lot of compassion. They’ve seen so much of the dark side where they say, ‘I won’t do it the same way,’ Powdrell said. “Their goal is to save lives.”

Carla Williams is an Albuquerque firefighter who attended the meeting as a community member, not representing Albuquerque Fire and Rescue, and was part of the team that provided emotional support to Washington Middle School after Hargrove was shot and killed. Williams said the middle school students trusted firefighters more than they did police officers.

“We have the big red truck and stuff like that,” Williams said. “They were like, ‘We’re glad you’re here’ and ‘We feel safe with you guys here.’ “

‘It’s your gun. It’s your responsibility.’

Lissa Knudsen was the news editor at the New Mexico Daily Lobo, following a stint as the publication’s public health beat reporter. She also worked as a data analyst for local NPR affiliate KUNM News. Her areas of coverage include politics and policy with an emphasis on racial and gender equity. Knudsen holds a bachelor's degree in health science and a master's degree in program planning and health education. She’s a critical cultural communication doctoral candidate, emphasizing reproductive justice, maternity and health. She is a board member of the New Mexico Public Health Association. Before she realized she was supposed to be a journalist, Knudsen was involved in local politics up until mid-2014, getting into hot water with her bosses as she pushed for transparency and public accountability.

What's on your ballot in 2022? by Staff Report November 7, 2022
Misogyny is fueling the country’s gun violence epidemic,… by Anna Gustafson, Michigan Advance July 22, 2022
‘We’ve got to get gaming out of our blood’ by Mario Koran, Wisconsin Watch/WPR April 6, 2022