City’s expert: Agreements have not protected neighborhoods from gentrification

Community benefits agreements are not a substitute for affordable housing, city contractor says

Julian Gross is a San Francisco-based attorney who works on community benefits agreements. He explained what they can do — and what they can’t — to Albuquerque residents last week. This still is from the Zoom meeting on Thursday, Oct. 14, 2021.

At a public forum led by the Albuquerque contractor tasked with shepherding the “community benefits agreement” (CBA) attached to the city government’s push to build a new soccer stadium, the last question put to him turned out to be the hardest one.

Julian Gross is a San Francisco-based attorney who has represented what he called community-based organizations and public entities in negotiations around large land-use development projects like the proposed New Mexico United stadium.

Gross and two city officials led a virtual public forum on Thursday, Oct. 15, about what community benefits agreements are. Some residents of the two neighborhoods where the stadium could be built have argued that the project will accelerate gentrification in the city and displace people already living near the proposed construction site.

An audience member asked, “In your tenure doing this work, how effective have affordable housing and anti-displacement policies within a CBA been upheld?”

“I’m going to take that as how effective have they been at protecting neighborhoods against gentrification? Maybe?” Gross said. He then let out an audible sigh.

I wish I could say I was confident that they’ve been really effective. I think that as important as ensuring that big projects like this have strong community benefits is, it's not enough.

“It doesn’t address the general land-use controls and housing policies, tenant protections, affordable housing strategies, that make up a city’s approach to this desperately important issue,” he said.

Gross said it is not reasonable to go forward with a big project in an area at risk of gentrification without attention to the effect on housing prices and affordable housing.

“I’m not here to denigrate the effort to make these projects deliver whatever a particular project can on that front, but it’s not at all a substitute for general strategy for affordable housing in a city,” he said. “I wish I had something more rousing to say, but I do think these things have really improved the level of affordable housing provided on the projects where we’ve done them. That’s all we can do with these agreements.”

Local grassroots group Stop the Stadium said in an emailed statement on Oct. 17 it makes no difference if there is a CBA or not.

They point to a 2018 study of professional sports stadiums’ impacts on rental values across 10 U.S. cities, which found median rent increased an average of $15 to $75 per year before construction, and an additional $40 to $50 per year after construction. Rent increased 10 miles in every direction, the study found.

Bex Hampton, an organizer with the group, said CBAs like the one proposed here fail to meet their expectations all the time.

“I’ve been trying to find an effective case of a CBA, because from what I’ve researched, CBAs are a tool to sell the project to residents,” Hampton said.

The Albuquerque City Council passed a resolution committing to implementing a CBA before starting construction on the project. City officials say if a CBA cannot be signed, there will be no stadium. But they are not going to complete the CBA before the election on Nov. 2.

“They’re saying the voters are choosing, but they’ve already decided where they want the stadium to be,” Hampton said.

The city hired Gross to assist the city in working on community benefits issues around the stadium if it goes forward and perhaps other redevelopment projects, he said. He described the Community Benefits Agreement (CBA) as “both a political tool and also a legal tool.”

“It’s a political tool for advocacy around these types of projects, and also a legal mechanism that gets into the standing and enforcement questions that people were just asking,” Gross said. 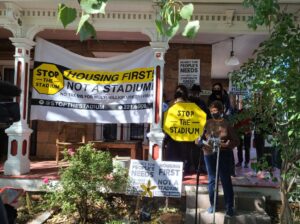 An audience member asked Gross about how CBAs work. He said CBAs need to be written to be clearly and strongly enforceable at the front end. Usually, the parties negotiate a right to go into court or go into arbitration to order the developer to comply with the CBA.

“Most CBAs are very tight and direct and strong in enforceability,” he said. “We have not had much trouble getting developers to comply.”

Crucial to a CBA is that it is an agreement between the developer and groups of community organizations who want to advocate around issues that will go into it. It’s less important for the city government to be a party to the CBA, he said.

There have been problems with community organizations not having the capacity to monitor their CBAs and stay engaged over time, he said.

“These things can be written and negotiated to be very strongly negotiable on paper,” Gross said. “The problems come up with successors coming in, and just the capacity of community-based organizations to monitor these things and stay engaged over time.

Most of these kinds of projects do not use CBAs, he said. Instead, most projects are governed by a “development agreement” between the developer and the local government, with no community involvement, like a subsidy agreement, a lease or a contract.

The facility itself is not a “community benefit,” Gross said. Other things that the community or the local government may want need to be negotiated and written into the document.

“In the past 20 or 30 years, community-based organizations have pushed really hard to make part of this land-use conversation, to fight gentrification, and to address economic opportunities,” Gross said.

Those community benefits include things like local hiring policies, living-wage policies, other efforts to target job quality, or money for social services provided in the neighborhood, job training money, child care stipends or a child care center, Gross said. And yes, you can work something related to housing into an agreement.

“You can’t really do a big project now without thinking about affordable housing, for most kinds of projects,” Gross said.

City’s expert: Agreements have not protected neighborhoods from gentrification

Straddling the divide between environmental action and… by Isabel Koyama February 28, 2022
Residents say new soccer stadium will raise rents and expand… by Austin Fisher October 14, 2021
Memory of a River: In another hot year, we fail the Rio… by Laura Paskus September 18, 2021