Demonstrators calling for an end to all evictions and the cancelation of rent debt listen to speakers outside the Metropolitan Court in Downtown Albuquerque in late September. (Photo by Marisa Demarco / Source NM)

Tenants across New Mexico faced illegal lockouts, price-gouging, harassment and unsafe living conditions throughout much of the pandemic, according to more than 100 complaints that went to the state Attorney General’s Office between March 2020 and February 2021.

The AG’s Office released more than 160 such complaints in response to a request from Source New Mexico.

The complaints from as far north as Aztec and as south as Las Cruces show how tenants have few places to turn if they suspect their landlord is breaking the law.

The office received about 100 more complaints since February, according to a spokesperson, though the AG’s office could not immediately produce them. Getting 260 housing complaints in 18 months represented a “sharp increase” in complaints during the pandemic, said Matt Baca, the AG’s Office chief lawyer.

One woman reached out to the office when her 100-year-old grandmother was being thrown out of her home. The grandmother was blamed for a flood she didn’t cause, according to the complaint, and she was facing eviction as retaliation.

At least three Albuquerque tenants complained that landlords raised rent prices at their apartments in March, April and July 2020, when many New Mexicans lost their jobs and hunkered down in their apartments to avoid spreading the coronavirus.

Another tenant said he, his daughter and their dogs “suffered heat exhaustion and undue stress” when their landlord shut off the air conditioning in June 2020, when temperatures outside exceeded 90 degrees Fahrenheit.

One woman alleged her landlord kicked her out because she had the virus.

Many of the complaints, if true, amounted to illegal evictions under a state law that prohibits landlords from forcing their tenants out of apartments by changing locks, turning off utilities or using other fraudulent means to bypass evictions in court. State law provides tenants the ability to seek damages in court, including being restored to their apartment. But it is rarely — if ever — invoked, housing attorneys told Source NM for our previous reporting on illegal evictions. 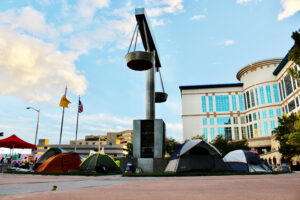 The documents also show that, in most cases, the AG’s Office would send tenants a copy of the state renter’s handbook or refer them to New Mexico Legal Aid. As far as actions, the records show the office once sent a letter to Candlelight Lane Apartments in Albuquerque regarding a price-gouging complaint and called landlords on behalf of tenants a handful of times.

Baca has said the office is limited in what it can do when facing a law-breaking landlord. The office does not represent individual clients in civil cases.

It also sometimes issues a cease-and-desist letter, as it did twice to Siegel Selects properties in Albuquerque.

In April 2020, the office sent the property manager at one Siegel complex a letter saying “that you are locking residents out of their rooms who have not paid rent without filing the appropriate petitions with a court, harassing residents and not providing replacement keys.”

The company’s response to the letter was not included in records provided by the AG’s Office, and it has not responded to requests for comment from Source New Mexico.

A handful of fraud investigations

When tenants in dire situations apply for emergency rental assistance, the state tries to pay the landlord directly using federal dollars allocated during the pandemic for this purpose. If the state can’t get ahold of the landlord, the money goes right to the tenant.

The bad news is, this might subject a fraud investigation into the tenant by the state.

The state Department of Finance Administration has referred several dozen applications from tenants for rent relief to another state agency for a potential fraud investigation, referrals that are drawing criticism from an advocacy group. 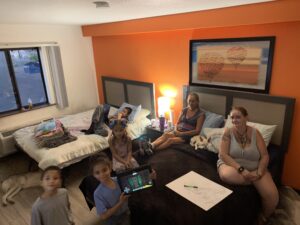 About 2,000 times during the pandemic, DFA has paid rent assistance directly to tenants because a landlord refused the assistance or didn’t respond to contact requests.

DFA has referred about 35 applications from tenants to the state’s Human Services Department for a potential fraud investigation, according to spokesperson Jodi McGinnis-Porter. (About 60% of rent recipients are already receiving some kind of public assistance, according to the state, which is why the applications are cross-checked with HSD.)

The Human Services Department’s inspector general is “helping DFA understand the tools available with the goal of identifying documents that may be out of the ordinary,” McGinnis-Porter said. None of the investigations have been completed, she said, so she wouldn’t provide more details about why the applications came under scrutiny.

Maria Griego, an attorney with the New Mexico Center on Law and Poverty, said the state should not be putting up more barriers for tenants who need stable housing.

She said the state should be making it easier for landlords and tenants to get the money.

Henry Valdez, DFA spokesperson, declined to comment on specific fraud referrals. He said every program like New Mexico’s “runs into fraudulent attempts,” which is why he said the investigations are necessary. He also said the state is doing what the federal government allows and that the agency will release more information soon about its plans for the program.

The state also cross-references documents provided by tenants with the state Tax and Revenue Department to prevent fraud, Valdez said

The state’s Emergency Rental Assistance Program is giving out $170 million in rent assistance, most often to landlords on behalf of tenants. As of Oct. 15, state officials said they’d spent $54 million of the money and earmarked another $71 million.

Memory of a River: In another hot year, we fail the… by Laura Paskus For The Santa Fe Reporter September 18, 2021
These Single Moms Are Forced to Choose: Reveal Their… by Eli Hager | ProPublica September 22, 2021
Prison Rat by Austin Fisher September 28, 2021