Local farmer Ron Moya stands in the field he was paid $2,750 in taxpayer money not to water this irrigation season. (Photo by Patrick Lohmann / Source New Mexico)

Local farmer Ron Moya stands in the field he was paid $2,750 in taxpayer money not to water this irrigation season. (Photo by Patrick Lohmann / Source New Mexico)

When New Mexico farmer Ron Moya looks out at the 10 acres of dead and dying alfalfa on his field near Tome, N.M., he sees green.

Specifically, he sees $2,750. That’s the cash he’s being paid for the simple act of not watering the field this year.

Moya is one of 44 farmers paid to not irrigate this season in the Middle Rio Grande valley, which stretches along the river between Cochiti Pueblo and Bosque del Apache. This is the first year the so-called Environmental Water Leasing Program was available to all farmers in the region, following a pilot program last year that enrolled 10 farmers in Valencia County.

The program will pay out $184,275 in federal taxpayer money to the farmers, who enrolled a combined 721 acres in the program this year.

Officials say 1,616 acre-feet of water was diverted for habitat preservation.

It’s a new tool for public officials seeking to conserve and divert water amid persistent drought — one that shows no signs of ending.

For the first two months of the season, water that would have gone on fields like Moya’s was available to other farmers in the area, though officials don’t know exactly how much.

Later in the season, as water levels fell across valley reservoirs, flows were diverted to four small outfalls along the river, areas that are meant to preserve habitat for endangered species, including the silvery minnow.

The outfalls would have gone dry if not for the 1,616 acre-feet of water diverted by the program, said Casey Ish, water specialist for the Middle Rio Grande Conservancy District. That’s about 526.5 million gallons. He announced the results of the program at a meeting earlier this month of the district’s board.

The effort will expand next year to deliver water to two more habitat areas along the river, Ish said, and the program could eventually become a tool for conserving water during extended drought and to help farmers support each other in dry times.

However, several farmers who opted out of the program paying people not to water criticized it on multiple fronts. For one, they said, the money isn’t going to the farmers who most need it; two, they said some farmers being paid had no intention of watering this year, anyway; and, three, they worried about the future of agriculture in the valley if farmers begin to rely on this flow of cash.

Moya is a hobby farmer. He has two 10-acre fields that he bought after his retirement from Sandia National Laboratories in 2013.

Health problems earlier this year made him reconsider growing alfalfa on one of his fields, he said.

And his brother, who runs a nearby farm belonging to his family, also had health problems that made him unlikely to farm it this year.

So Moya was left with a choice about whether to take on another season of alfalfa farming at both sites by himself as he recovered.

The cash made it OK to say no, he said, and gave him the satisfaction of helping with conservation efforts.

“My guess is, had we not filed for (the program) we would have done something,” he said. “We wouldn’t have just left it barren.”

But it’s not clear how many other farmers’ watering plans were changed because of the leasing program.

One farmer, Alfred Gabaldon, said he knows a fellow farmer who bragged about taking the money for a field he already planned not to water this year. (That farmer couldn’t be reached for comment.)

And Mark Mechenbier, a pecan farmer overseeing about 1,400 acres, said he initially enrolled in the program because he already intended not to water a couple swathes of land due to anticipated drought. (Mechenbier later decided not to enroll, he said).

“Whatever we had, we couldn’t grow corn during the summer, another crop or anything anyway,” he said. “So why not put it in the program?

“We do a bit of due diligence on our side to make sure that at least that land has a historical track record of being irrigated,” he said, “so that within a certain degree we feel confident that the water being released from that land is is wet water, not just paper water.”

For example, only acreage that had been irrigated three of the five past years could be enrolled in the program, he said. No farmer who is delinquent on water service charges can enroll, either, he said.

“It’s not a perfect system,” he said, “you’re never gonna know at anyone’s core, what they were planning on doing at any given time.”

Some farmers also criticized the program for paying too little. Even for low-value crops like alfalfa, $275 is about one-quarter of what a farmer can make per cutting. For high-value crops like Mechenbier’s pecans, $275 doesn’t come close, he said.

The low price means few full-time farmers would find the program economical, leaving it only worthwhile for part-timers like Moya.

But Ish said that the lower price is by design. In fact, he wants to especially target part-time farmers “on the margins” to alleviate pressure on those full-timers whose livelihoods rely on profits from each harvest.

“It makes a lot more sense for us to use the limited money that we have to concentrate on some of the farmland where we think folks will be more amenable to a smaller per-acre rate,” he said.

It would cost $600 to $700 per acre to make it worthwhile for full-time farmers, Ish estimated.

The leasing program is funded through a $9 million federal grant paid through the National Fish and Wildlife Foundation. Money also goes  improving water infrastructure, education and outreach and other conservation efforts.

Ish said the budget for the leasing program varies depending on other expenses in the grant and what precipitation predictions are. It’s not based on spending a budgeted amount, he said.

At the beginning of the season, Ish said the district’s officials thought they’d need much higher participation in the leasing program.

“We were looking at drastically different hydrological conditions for this irrigation season. And early on, we had discussed trying to enroll as much as 20,000 acres into the program,” he said.

The program is, at least for now, not designed to enroll huge swathes of land, he said. He’s not sure where the program would get money to enroll 20,000 acres if 2022 ends up with similar drought conditions as were predicted at the beginning of 2021.

“That was a lofty goal that more than anything just symbolized the need for the district to look closely at demand and supply in a year like this and try and mitigate it as much as possible,” Ish said.

Even when officials were considering enrolling 20,000 acres, Ish said, they never discussed increasing the per-acre payment. He said it’s difficult to build a sustainable leasing program that pays more than they’re paying now.

Other programs he researched had to reduce the price after the first year, which meant a steep drop in enrollment and, in turn, the amount of water preserved, he said.

He could not say how much money was or will be budgeted for the leasing program of the $9 million grant.

He’ll figure out how much can be spent early next year, he said, when forecasting how much water might be needed to protect the habitat and help farmers survive another dry year.

‘All you see is houses’

Mechenbier, a fifth-generation valley farmer who oversees about 1,400 combined acres in the valley, said the leasing program is just a Band-Aid on the financial insecurity he and his peers face.

“Your endangered species is going to become the farmer,” he said, if current conditions persist.

The region’s 11,000 irrigators were banned from irrigating this year for a month at the beginning and end of the season, which hurt harvests and forced some farmers to take on debt or make difficult decisions. 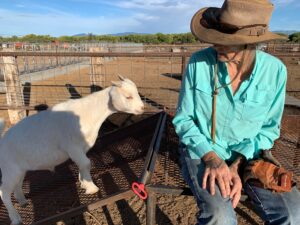 He sees every gallon diverted to protecting the minnow as one that should be used instead to keep the valley fertile. He’d much prefer a program that allowed him to lease water to a fellow farmer instead of toward conservation. (Ish said that type of program is possible in the future.)

Mechenbier remembers seeing his family’s farm in the South Valley become surrounded by subdivisions. He’s worried the leasing program will spur farmers to leave more of their property permanently dry, further eroding agriculture in the valley.

“Drive down Rio Bravo today. All you see is houses,” he said. “All that was open agrarian setting before.”

Ish said the program does not allow farmers to enroll the same acres two years in a row, precisely to keep farmland productive and sustainable, he said.

But Mechenbier said he doesn’t trust that the conservation district is valuing agriculture over the interests of the minnow or maintaining water flows throughout the river.

He urged officials to go back to “think outside the box” for solutions, like getting rid of invasive species, devoting less water to “artificial” habitats along the river and making it more lucrative for farmers to save water. Those are the types of big-picture solutions that will help balance conservation and agriculture, he said.

“That’s how you’re going to preserve this,” he said. “Not paying somebody something to not do it at all.”

Memory of a River: In another hot year, we fail the… by Laura Paskus For The Santa Fe Reporter September 18, 2021
‘It’s my livelihood’: Drought and restrictions could… by Patrick Lohmann October 11, 2021
These Single Moms Are Forced to Choose: Reveal Their… by Eli Hager | ProPublica September 22, 2021