Need for medical care, support and services increased during the pandemic, advocates say

Attendees of a rally for missing and murdered Indigenous women and relatives hold their signs up high as they march through Old Town on Oct. 3, 2021. (Photo by Shelby Kleinhans for Source NM)

New Mexico needs to double the amount of money it provides for victims of sexual assault.

This is according to testimony by leaders from the New Mexico Coalition of Sexual Assault Programs. Member organizations provide a wide spectrum of for people who’ve been assaulted while they navigate systems and options for protection.

They asked the state’s Legislative Finance Committee to boost funding by $5.5 million — more than doubling the $4.2 million they receive now. The need comes from repeated budget denials. The coalition has not seen an increase since it was established nearly a decade ago, members told lawmakers, and they’ve seen a spike in the number of cases spawned from the pandemic.

Support for victims of sexual assault is a longstanding effort, said Alexandria Taylor, the coalition’s deputy director. But case numbers rose alongside COVID-19. 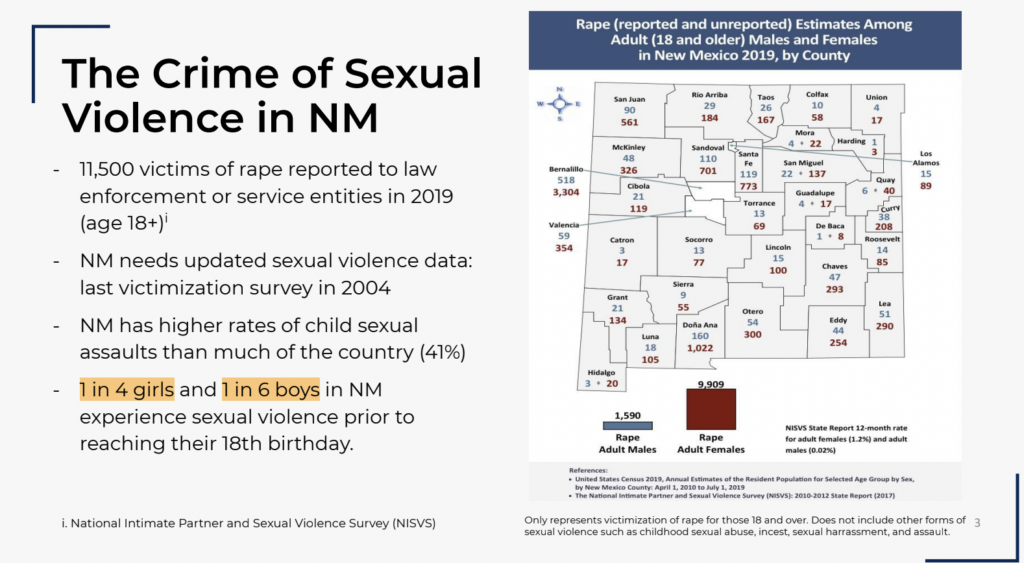 “What we saw during the pandemic is more people reaching out for help because of the isolation,” Taylor said, “and the risk factors for sexual assault are similar to the risk factors of the virus.”

Taylor said victims do not receive adequate care in a timely manner, and that especially affects people in rural communities who can experience hours long waits for care.

Those are the moments after one of the worst things has happened to someone, she said, and three hours to access necessary medical care “is not OK, and that’s not adequate.”

Gas and transportation are key resources immediately after a trauma when a person might need to report a sexual assault case by traveling a ways into a town with the resources to administer a rape kit. That’s also true for survivors of these attacks who need mental health resources that can support their recovery.

Members of the New Mexico Legislative Finance Committee tabled all budget requests during their hearings on Wednesday, a standard procedure to allow the committee to determine priorities for their upcoming proposals for the state during the 2022 legislative session.

“I have an amazing team of 19, of which 11 are state investigators who provide financial assistance to victims of crime. And they do that with medical expenses, dental expenses, mental health, funeral, loss of earnings reimbursement for copays, traveling for medical appointments and court dates.”

Stacy Blazer-Clark works with people in southern New Mexico who have experienced sexual assault in their homes. Her group supports people in Las Cruces via the agency La Piñon Sexual Assault Recovery Services.

“We did see an increase in our numbers once our kids went back to school, and statistics show that children are abused by people that they love and trust most of the time,” she said. “Most of the time those individuals, those abusers, live with with the children.”

Other items presented to the LFC on Wednesday included state agencies that focus on support for children, parolees and education.

The stats aren’t great for New Mexico. the state ranks seventh in the country for its high rates of sexual violence, according to the data from 2014-2019 that is compiled by the New Mexico Interpersonal Violence Data Central Repository. Violence against children is staggering in the state, and more than 41% of reported assaults involve people under 18. In the same five-year period, the coalition reports that one in four girls and one in six boys experience sexual violence before they turn 18.

In some cases, children are in the home while assaults against other people take place. They’re not necessarily the direct victims but still need services and care. For that reason, the coalition is calling for lawmakers to provide support for all people near this violence.

“Our kids weren’t in school for an entire year,” Taylor said. “And so we now have those educators who have their eyes and ears on our kiddos again, who are making those reports. And what we are finding is that the violence was more severe, which means that the families need more resources.”

For Indigenous people, the rates are even more harsh and prevalent. According to data the coalition presented to lawmakers, one in three Indigenous women in New Mexico have reported an experience with sexual assault. More than 60% of crimes reported on tribal nations are sexual assault cases, and more than 88% of survivors in those cases say their offender was also Native American, according to the presentation before lawmakers from the coalition.

Justice doesn’t come easy. Not only do an estimated 83% of survivors not report their incident, when they do, some judicial districts in New Mexico have a 91% rate of cases being dismissed.

“Those are also communities where we have the highest wait times for services,” Taylor said.

These are the figures advocates face when climbing uphill to provide support for their clients who have survived these experiences.

This is why the group is asking for an additional $5 million dollars to support their services that connect people to counseling and why they say New Mexico needs six more sexual assault service programs in the state. The majority of these resources are centralized in areas around Albuquerque while being absent in places like southwestern New Mexico.

This again being something that a frontline worker like Blazer-Clark engages with daily, working with more than 550 adults and 600 children from communities in Las Cruces and nearby.

“When people have to talk about sexual assault, it carries such a taboo. Having a conversation about sexual assault, having a conversation about child abuse, also means that you’re acknowledging that it happens,” she said. “And if it hasn’t directly affected families, you don’t want to have to talk about it. It makes people uncomfortable. And I really think that that is also the case, even in politics, is that if we don’t acknowledge that it exists, then we don’t have to deal with it.”