FBI agents in the Four Corners are adapting to Indigenous community needs by adopting traditional language specialists for field work that asks people for tips to help solve crimes.

Melinda Nakai (Diné) is an outreach specialist with the federal agency. Born in Gallup, N.M., she is also the first certified Navajo language translator with the FBI, grasping onto her upbringing on the Navajo Nation.

“Navajo was my first language,” she said. “And I was bilingual already at a very early age. I spoke English as well.”

Nakai, who works out of the Salt Lake City field office, saw this new role created in response to a request from the FBI’s Diversity Advisory Committee seeking more resources to assist with an increase in cases in tribal communities.

“A lot of cases came out of the Navajo Nation, and there was a need for translations and operational support,” Nakai said. It took a few years for the committee’s plan to be recognized and adopted by the FBI, she said.  “And that’s where I came in.”

So far, she’s translated 18 posters into the Navajo language that seek information for cases involving Missing and Murdered Indigenous Women and Relatives. Nakai translates flyers as requests from agents come to her desk. The FBI is conducting this type of work with just the Navajo Nation but would like to expand to other tribal communities. 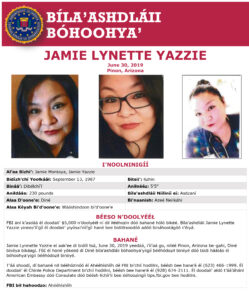 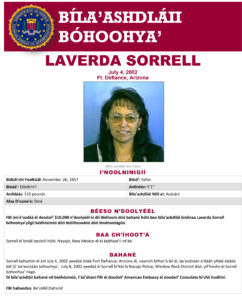 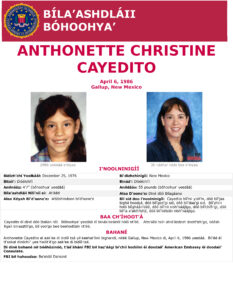 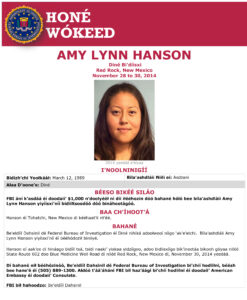 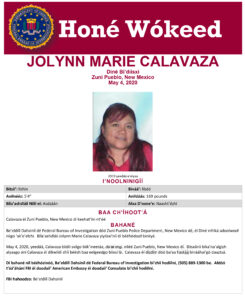 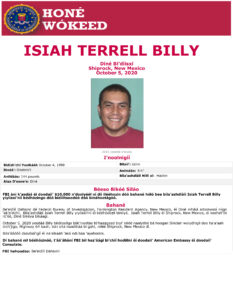 “The FBI has been spreading the message to communities all over the country that hate crimes are not tolerated. We want victims and witnesses to come forward,” FBI spokesperson Frank Fisher said. “We understand that there are many Navajos who speak that language in their homes, and we wanted this message to reach them.” 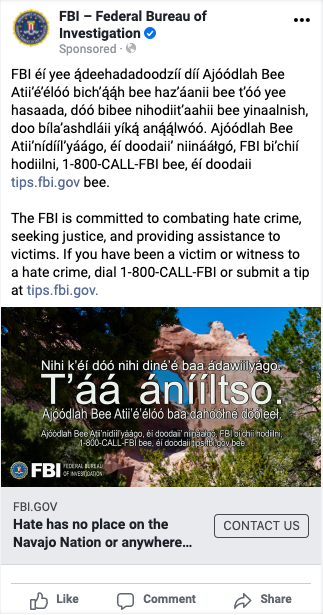 Nakai is one of two FBI employees certified by the bureau to translate work into the Navajo language. The Navajo-language certification program is still developing, but the tests Nakai and her colleague took were similar to other language assessments FBI agents take to be considered a translation specialist, which include written and oral examinations.The tests were administered back at headquarters.The tests were administered back at headquarters.

“I’m certified as a monitor right now,” Nakai said. “That means that I can assist with the cases.” That means she can be out there with agents in the field.

The language services are also an attempt to build greater relationships with tribal communities, often presenting leaders with consultation on how to access FBI resources. Nakai said the outreach must remain consistent and also supportive of the community needs.

People generally want safety, she said, and if done well, the FBI presence is positive. “They want their communities to prosper. If we know about the need and what the issues are, we can come in, and we can formulate a plan and get a program set up and and do it,” she said, “ not just with the FBI leading, but we do it hand-in-hand with the communities that we serve.”

Many of these cases track with Missing and Murdered Indigenous Women and Relatives investigations. Nakai said she is consistently asked by tribal leaders about jurisdiction and  processes, and she receives requests for training tribal leadership and local law enforcement.

“We do a lot of collaboration with stakeholders at the local, state, and in some cases, with the federal agencies,” she said. The programs for Indian Country are tailored to needs and requests, Nakai added, so the FBI creates presentations and panel discussions.

Growing near Gallup and regularly visiting the border town gave Nakai a perspective of the simmering environment underneath crime there. It’s the reason there’s a need for campaigns like the one soliciting information about hate crimes.

When you get into those communities or in that town, you cannot miss the issues, the social issues. They're apparent. They're right there. They're right in front of you.

You hear about these kinds of crimes through conversations. “You hear about how violence impacted so and so’s home, so yes, it was a very normal thing.”

Fisher, who works out of the Albuquerque field office, said the distrust between federal law enforcement and tribal communities can hinder investigations, but it is something the bureau wants to overcome.

“What is frustrating is when we don’t get the witnesses who could give us that valuable information to come forward,” he said.

That tense relationship between law enforcement and the communities dates back a ways, he said, and they’re working to overcome it. “It’s been a long time that we have had some mistrust, maybe between Indigenous populations and the FBI and law enforcement,” he said. “We want to go to where they are to talk to them. We believe it’s very difficult to dislike someone if you met that person and had coffee with them and spent some time with them.”