A ‘very different-looking map’ could reshape both New Mexico and U.S. politics

Gov. Michelle Lujan Grisham on Friday signed off on a new congressional map, one that its sponsor has said “reshapes” the state’s political map and imagines a “more united state — rural and urban.”

And it gives Democrats a better chance of winning all three congressional seats, while also giving each party less of an advantage in each of those districts. This year’s winter special session is the first time since 1992 that Democrats controlled both chambers and the governor’s office during redistricting.

The map looks different than maps created each decade since 1982, when New Mexico first got three congressional seats. Previously, lawmakers generally drew boundaries around the center-state metropolitan area for one district, and then separated the north and south of New Mexico for the other two.

This time, however, they split the Albuquerque metro area into three districts and paired far-flung communities — like Roswell and Gallup in CD 3, for example, or Albuquerque’s Westside with the New Mexico bootheel into CD 2. The map is almost a pinwheel spiraling out of the state’s most populous city.

“New Mexico is a vast and diverse state, with both rural and urban communities and interests that span the spectrum politically and economically,” Lujan Grisham said in a news release.

State Sen. Joseph Cervantes (D-Las Cruces) said the map he introduced is important because it acknowledges the connected nature of the New Mexico economy and culture, like when it comes to water, education and business.

Michael Rocca, a University of New Mexico political science professor, said the new districts may well reflect a new New Mexico that’s no longer divided into urban and rural parts, but they are also a consequence of a single party in control of congressional seats ahead of a competitive midterm race.

“This is a very different-looking map than we’ve had previously,” Rocca said in an interview.

The 2022 midterm elections are extremely tight across the U.S., Rocca said, meaning that flipping CD 2 in New Mexico — Republican Rep. Yvette Herrell’s district today — could be the difference between Republicans or Democrats in charge of the U.S. House of Representatives.

The N.M. redistricting plan gives Democrats a better chance of taking all three seats, while simultaneously making Republicans more competitive in the districts that have historically favored Democrats, according to an analysis by FiveThirtyEight.com.

Courts are often asked to weigh in when one party sues another over redistricting, accusing the other side of partisan gerrymandering. One way courts determine whether a map is gerrymandered is by examining whether “communities of interest” are split. That can mean aligned demographics, those who have a shared history or culture, or those who live within the same county or town.

Rocca said the map the governor signed appears to split several counties. But whether that means the maps are gerrymandered is a question for courts, and it isn’t obvious. 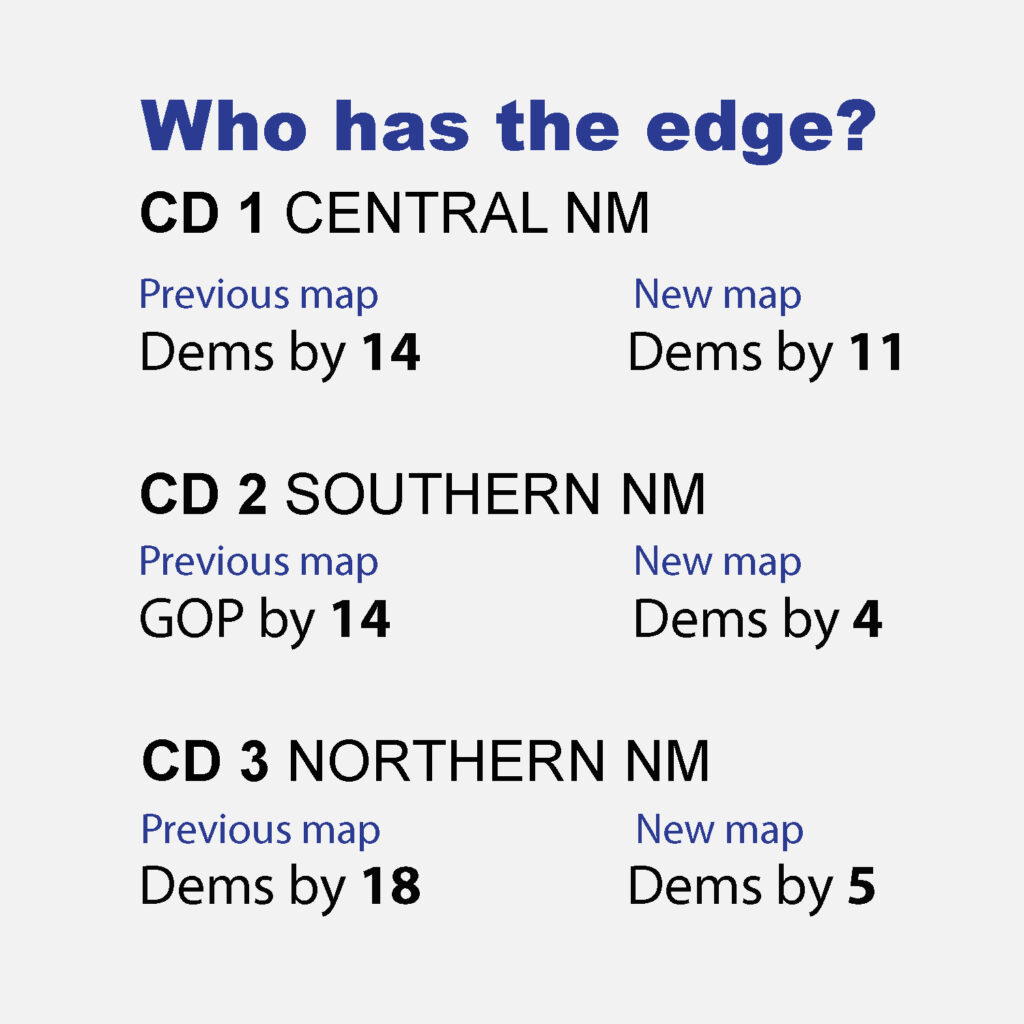 “I think the Republican Party in the state of New Mexico has legitimate criticism of these currently drawn districts in that they do disrupt some counties,” Rocca said. “It’s split counties in these really interesting ways.”

But the argument Cervantes made – that New Mexico would be better-served by a member of Congress responsive to both rural and urban residents – could also be true, he said.

“There seems like there would be some representational benefits to having both rural and urban communities within the same district, as a reflection of the broader state itself,” he said.

That said, Rocca always assumes politicians, given the advantage, do whatever it takes to help themselves or their own party, despite lofty claims by state Senate Democrats about how this map represents a newly united state.

“I would argue that all of this is almost entirely dictated by election politics,” Rocca said. “… There are going to be very, very potentially important ramifications for even just being able to regain one seat, like the second congressional district, for whether President Biden has allies in control of Congress for the next two years, three years.”

State Sen. Mark Moores (R-Albuquerque) was an outspoken opponent of the new map during debate on the Senate floor. He said, as a republic, the United States already has an elected federal body that is designed to represent the diverse interests of the state: The United States Senate, where every senator represents the whole state.

But the Democrats decided to take their partisan advantage, Moores said, and in doing so, divided communities where it made sense for them to stay united.

The new political maps being more competitive doesn’t necessarily mean the candidates who step up to represent them will be more moderate, Rocca said. That will be determined in the state’s closed primaries, which often spur candidates to take more extreme positions to excite their bases.

But, Rocca said, with the point gaps closing, each district will likely see higher quality underdog candidates running in districts where they previously thought they might not have any real shot.

The new plan is based on, but not entirely reflective of, a map proposed by the Citizen Redistricting Committee, a newly formed panel that aimed to take partisanship out of the once-a-decade redistricting process. Cervantes said it was 86% faithful to the CRC map.

Memory of a River: In another hot year, we fail the… by Laura Paskus For The Santa Fe Reporter September 18, 2021
These Single Moms Are Forced to Choose: Reveal Their… by Eli Hager | ProPublica September 22, 2021
Prison Rat by Austin Fisher September 28, 2021