The map colors changed, but did the risk?

A map of the United States is shown using the old CDC COVID-19 risk metric (left) and the new one (right). (Courtesy of the Centers for Disease Control and Prevention)

Officials from the Centers for Disease Control and Prevention and the New Mexico Department of Health are asking the public to adopt a new way of thinking about the COVID-19 pandemic.

On Feb. 25, CDC Director Rochelle Walensky announced that the agency “updated its framework to monitor the level of COVID-19 in communities.”

CDC updated its framework to monitor the level of #COVID19 in communities. This framework moves beyond looking just at cases & test positivity to evaluate factors that reflect severity of disease, including hospitalizations & hospital capacity.
https://t.co/SJP6nXZVE7

The basics of the epidemiological situation have not changed — community spread is still what it was before the new framework — but the standard that the CDC is using to make its guidelines has changed.

“Community transmission level” was based on how many tested positive for the disease per 100,000 people. It provided a picture of how much spread is happening.

The new metric, the “community level,” is determined by a combination of three pieces of information:

The case metrics are still there but are significantly downplayed. Cases are a “distant third” in the calculation, acting New Mexico Health Secretary David Scrase told reporters last week.

Now, until your county passes a case threshold of more than 200 cases per capita, case counts do not factor in.

“The COVID-19 community level is determined by the higher of the new admissions and inpatient beds metrics, based on the current level of new cases per 100,000 population in the past seven days,” the CDC explains.

In other words, the metric is weighted so that until a county has 200 cases per capita, hospital capacity is the only thing that determines whether a county is low, medium or high risk.

For example, if your county’s hospital capacity is dropping, the CDC checks that against the case counts. And if there are fewer than 200 per capita, then the number of cases doesn’t affect the risk level. If it’s over 200 cases per capita, then it bumps the risk up a level.

Plus, 100 cases per capita used to mean a county had a “high” level of COVID-19 transmission. Now, it takes twice that many to move the needle. 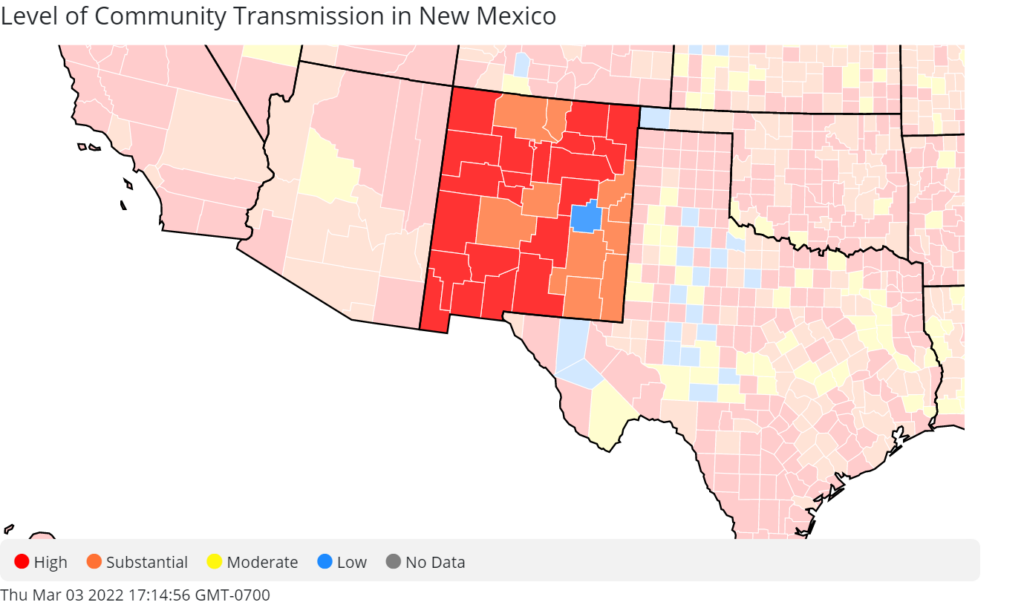 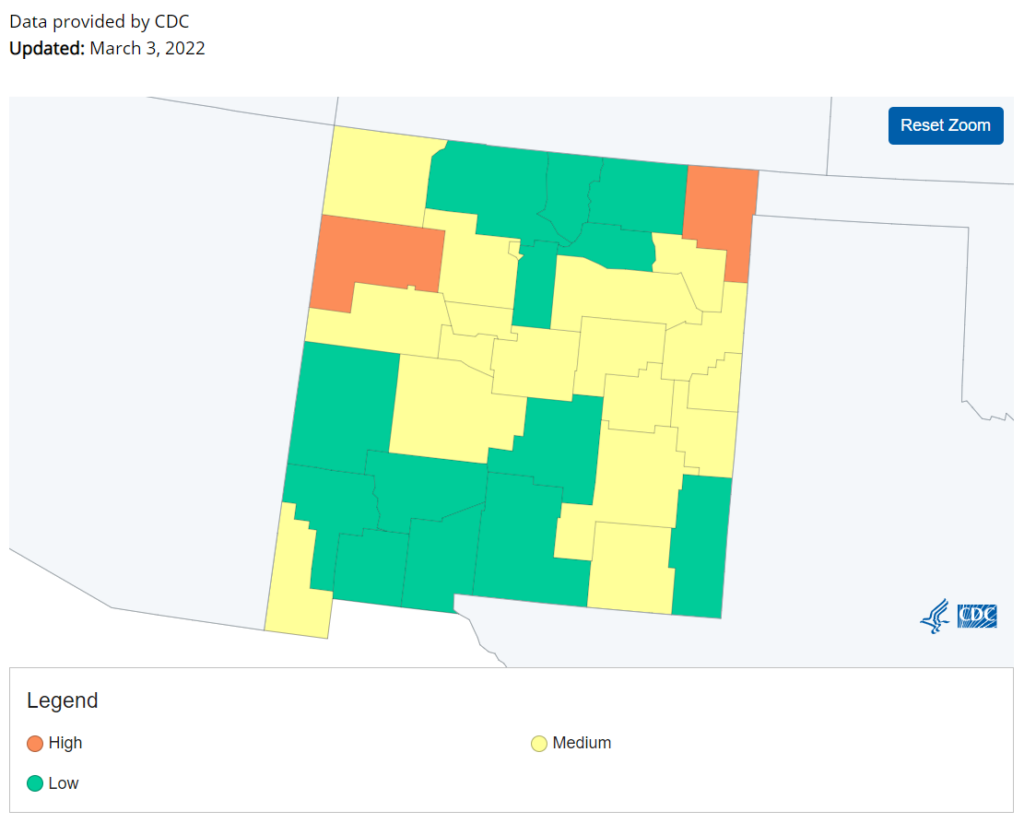 Now, masking is only recommended by the CDC for “high” level counties — including for immunocompromised people.

Vanessa Lamers, a health scientist and assistant director at the Public Health Foundation, is critical of the new standards because with so few people vaccinated in some communities — and with children under 5 unable to get vaccinated — she said it is unethical to drop public health measures like masking. Relying on “health care capacity” alone does not take risks for everyone into account.

“It feels like we are purposely leaving people behind,” Lamers wrote in a thread on Twitter on Saturday. “Instead of doing more to vaccinate people and ensure their safety and survival, we are merely saying ‘your choice to die a horribly painful death since you didn’t get vaccinated.’”

What does this mean for you?

If someone is living in a low-risk county, Scrase said, they might start going out shopping or to a restaurant, and choosing whether to wear a mask. But if someone lives in a high-risk county, they should seriously weigh whether they want to be in indoor spaces, he said.

“If you are immunocompromised or have serious risk factors, you might want to live in sort of an orange (high-risk) kind of level all the time to protect yourself more,” he said.

According to even the new CDC guidelines, that means immunocompromised people should wear a mask or respirator that provides greater protection, consider avoiding non-essential indoor activities in public where you could be exposed, and talking to your health care provider about masking and testing, or about whether you are a candidate for treatments like oral antivirals, PrEP and monoclonal antibodies.

About 60,000 New Mexicans self-reported that they were immunocompromised when they signed up for the vaccine, Department of Health spokesperson Katy Diffendorfer wrote in an email in response to Source NM questions.

That would represent about 2.8% of the entire state’s population, which is similar to the 2.7% of U.S. adults who self-reported that they were immunosuppressed in a 2013 survey analyzed by the CDC in 2016. However, that is likely an undercount because self-reporting is prone to errors, the researchers wrote.

So does this mean that high-risk individuals in New Mexico should be expected to never again participate in indoor activities in public? Diffendorfer responded that all Health Department guidance is continually reviewed, updated and reflective of where we are in the pandemic.

“Nothing is suggested as ‘forever’ guidance,” Diffendorfer wrote.

Neither the CDC nor New Mexico have any recommendations in instances where, for example, someone shares a workplace with a colleague who is high-risk. They also do not address situations where an individual lives with a cancer patient in a low-level county but commutes to work in a high-level county.

“It is both a freedom and responsibility of any individual to conduct their own personal risk assessment and act accordingly,” Diffendorfer said.

Scrase said state health officials are not having any discussions about using the new CDC metric for making “statewide policy decisions.” He said there’s no discussion going on to implement new mandates related to the new CDC guidance on a county level.

The state will still monitor and report cases, Scrase said, but hospitalizations and the percentage of filled beds have been the primary resource constraint since the beginning of the pandemic.

“The CDC is exactly right, in our opinion, to turn the focus to that now,” Scrase said.

The map colors changed, but did the risk?

What's on your ballot in 2022? by Staff Report November 7, 2022
Tribes need tax revenue. States keep taking it. by Maya Srikrishnan, Center For Public Integrity December 23, 2022
Straddling the divide between environmental action and… by Isabel Koyama February 28, 2022