As teen mental health worsens, schools learn how to help

Teen mental health already was deteriorating before the coronavirus pandemic. In the two years since, the isolation, grief and anxiety created by school closures, deaths and loss of family income have led to even steeper declines in children’s mental health, experts say.

Awash in federal pandemic relief money—  roughly $190 billion in education and health grants over the next four years—states are responding.

“The pandemic shined a spotlight on our children’s mental health,” she said.

There’s no question that it’s something we need to pay attention to and that we need to act pretty quickly so that things don’t get worse.

A central theme in many of the pandemic-inspired new laws is mental health training.

At least 16 states, from Alaska to Massachusetts, plus the District of Columbia, now require K-12 teachers and other school staff to take training courses on how to recognize mental distress in students and what to do when they see it.

“Teachers are critical to identifying students who need mental health supports,” said Nancy Lever, co-director of the National Center for School Mental Health at the University of Maryland School of Medicine.

“But we also need to make sure that parents and other school staff who interact with students are trained to recognize mental health crises and understand how trauma affects children’s mental health and learning,” she said.

To find options support for mental health or substance use disorders, the Substance Abuse and Mental Health Services Administration can help you figure out what’s nearby.

In English and Spanish

In some states, new laws provide money for mental health screening and data collection tools that schools can use to develop long-range mental health strategies and measure their progress. Other laws require school boards to develop evidence-based plans for protecting the mental health of K-12 students.

“This is not new territory,” Lever said, “but it’s important territory that schools need to plan for so they can promote the mental wellbeing of all students and staff, and at the same time, identify and care for those in crisis.”

A key to schools’ success will be building in sustainability so the programs can go on when the funding ends, she added.

In 2019, a national survey conducted by the federal Substance Abuse and Mental Health Services Administration showed that the percentage of young people ages 12 to 17 who reported experiencing a major depressive episode in the past year had nearly doubled over the past decade, increasing from 9% or 2.2 million children in 2004 to 16% or 3.8 million children in 2019.

By 2021, more than a quarter of U.S. parents reported their adolescent had seen a mental health specialist, with 59% doing so in the past year, according to a survey published last month by the C.S. Mott Children’s Hospital at the University of Michigan.

Suicide is now the second leading cause of death among children 10 to 14, according to the federal Centers for Disease Control and Prevention. 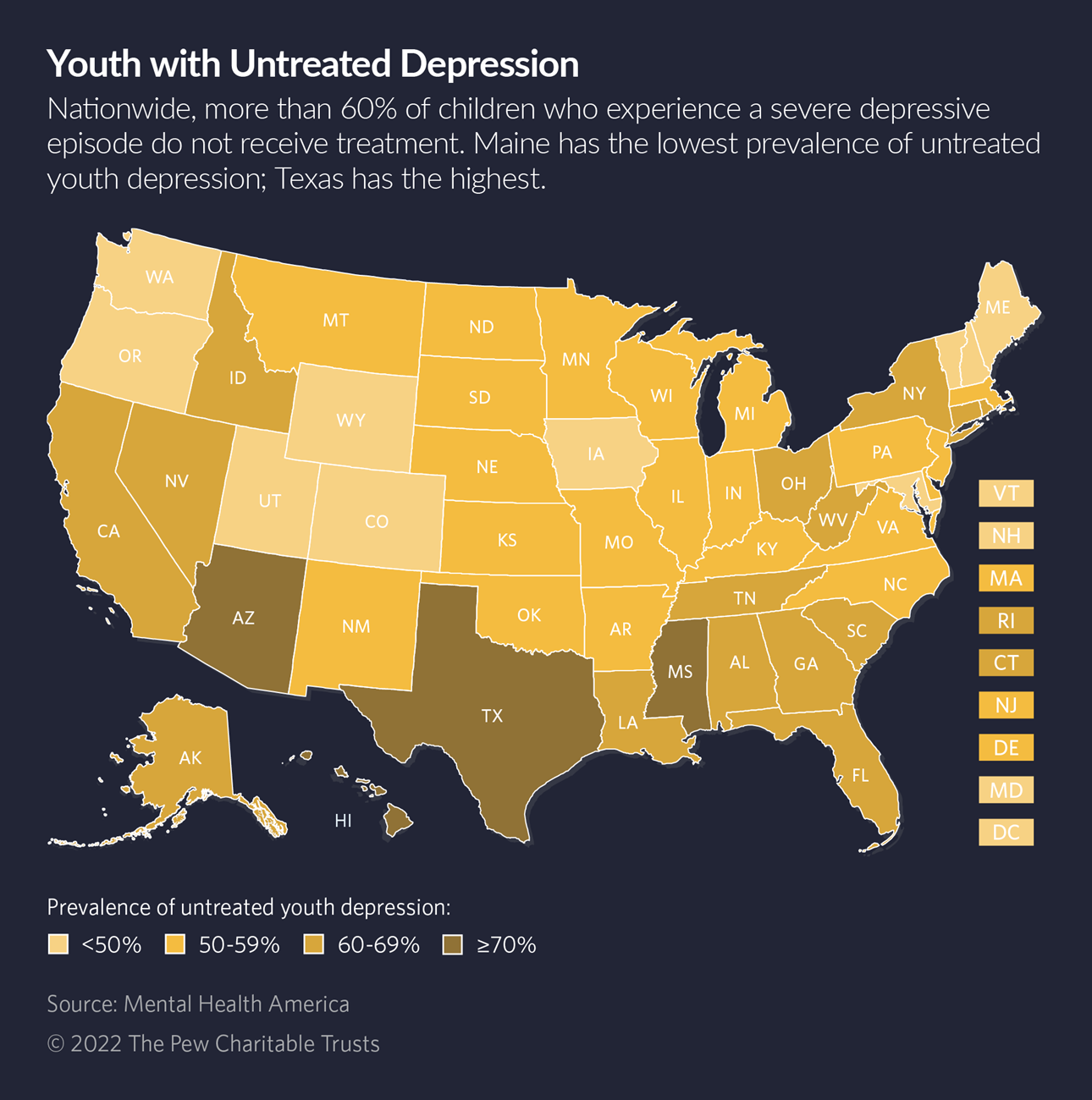 This month, the federal health agency reported that in the first half of 2021, more than 4 in 10 high school students surveyed said they had “persistent feelings of sadness or hopelessness” in the prior year, which was one of isolation and school closures for most teens.

“These data echo a cry for help,” CDC acting Principal Deputy Director Dr. Debra Houry said in a news release. “The COVID-19 pandemic has created traumatic stressors that have the potential to further erode students’ mental wellbeing. Our research shows that surrounding youth with the proper support can reverse these trends and help our youth now and in the future.”

But mental health experts say schools, which are often the only place troubled youth can look to for help, are not prepared to address the growing adolescent mental health crisis.

Historically, most states have failed to meet national minimum standards for the number of students served by mental health professionals, including school psychologists, counselors and social workers.

Only Idaho and the District of Columbia meet the recommended ratio of one school psychologist for every 500 students. At the bottom of the list, Georgia schools employ only one psychologist for every 6,390 students, according to America’s School Mental Health Report Card, published in February by a coalition of mental health organizations.

In New Mexico, there is one school psychologist for every 3,673 students.

Recommended ratio: One for every 500 students

There is one school social worker for every 945 students in N.M.

Recommended ratio: One for every 250 students

The number of K-12 schools signing up for one of the most commonly used mental health training programs, called Mental Health First Aid, jumped 17.5% since the end of last year, according to the National Council for Mental Wellbeing, which administers the course.

“Every state in this country has adopted youth mental health first aid in some schools in some way,” the council’s EL-Amin said. “This year’s surge in legislative activity is helping get the word out.”

Developed and tested in Australia, the roughly 32-hour training program was adopted in the U.S. in 2008 by the council in collaboration with the Maryland Department of Health and Mental Hygiene and the Missouri Department of Mental Health.

With 25,000 instructors, the evidence-based curriculum has been used to train 2.7 million Americans in a variety of professions. Offered online and in person, the course teaches people to recognize the signs of a mental health or substance use problem, respond to someone in crisis rather than turn away and urge the person to talk to a mental health professional.

In the U.S., about 1 million people have completed a specialized version of the course designed for teachers, parents and others who interact with adolescents. More than half work in K-12 schools.

The course also has been adapted so teens can help each other, and more than 125,000 students in 700 schools and youth groups have completed it since 2020.

Graduates of the course say they’re able to use what they learned to help someone within an average of three months, EL-Amin said.

Emma Bap, who took the first aid course last year at Bellows Free Academy High School in St. Albans, Vermont, told the council that the program gave her “more confidence to reach out to someone who seems to be struggling—and quite possibly save a life.”

Mental health training courses typically offer scripts for what to say and what not to say to teens who may be thinking about ending their life. The training also emphasizes that teens should report to a teacher or another adult any potential suicide concerns they may have about a friend or classmate.

Separate training programs for adults and youths spell out ways to intervene in a potential suicide, underscoring that suicide is preventable.

But training alone is not enough to prevent suicides and ensure that kids experiencing mental illness get the care they need, said Julie Goldstein Grumet, an expert in suicide prevention.

They also need to develop and sustain strong mental health community partners they can rely on to help their at-risk students, she added.

“Training is great and important, but it has to be embedded in a comprehensive approach where it’s not ‘one and done,’” Grumet said. “Schools shouldn’t be saying ‘we did the training,’ but rather ‘we transformed the entire culture around suicide prevention and mental health.’”

This story was originally published by Stateline, an initiative of The Pew Charitable Trusts. It is republished here with permission.

As teen mental health worsens, schools learn how to help

Christine Vestal covers mental health and drug addiction for Stateline. Before joining Pew she covered health care, the environment, energy, information technology and telecommunications for a variety of news outlets, including McGraw-Hill, the Financial Times and Post-Newsweek Business Information. At Stateline, she has covered the legal and political battles over the Affordable Care Act and expansion of Medicaid to more low-income adults. She has also written about children’s health, Medicaid, mental health, wellness, and a wide variety of public health issues. Currently, Vestal is focusing on the prescription painkiller and heroin epidemic, including efforts to stem overdose deaths by making addiction treatment with medications more widely available.