FEMA Administrator Deanne Criswell acknowledged that some homeowners may not have insurance policies that can cover the costs from the fires. “FEMA programs though, they’re not designed to make individuals whole,” she said. (Photo by Austin Fisher / Source NM)

As many as 1,500 buildings have been destroyed, and more than 10,000 people have fled from the wildfire burning in northern New Mexico, according to the governor, but it’s unlikely that those people will get their homes or livelihoods back without some kind of successful joint effort by Congress and state officials.

As of Tuesday, only 2,000 people had applied for relief authorized by President Joe Biden’s May 4 emergency declaration for the Hermits Peak-Calf Canyon fire, said FEMA Administrator Deanne Criswell.

Of those, only 446 have been approved to receive it, she told reporters at a news conference in the Governor’s Office.

The number of structures destroyed so far is only a guess, the governor added. FEMA has not yet been able to actually go into the areas affected by the fire because it is too dangerous, and infrared cameras are unable to distinguish between homes and other structures like barns, she said.

Criswell said insurance is supposed to be the first source of relief for people who have lost homes, and for anything not insured, “FEMA can provide some limited support there, as well.”

Criswell acknowledged that some homeowners may not have insurance policies that can cover the costs from the fires.

“We do know that — while we’re still in this response phase — the recovery is going to be long,” Criswell said. “FEMA will be here with you on every step of that recovery process.”

Criswell encouraged anyone in Colfax, Lincoln, San Miguel, Mora and Valencia Counties to register for assistance from FEMA in order to receive it as soon as possible.

“If you’re not in one of those counties, you certainly can go in and register, but you’re not going to be able to get any assistance unless it gets declared at a later date,” Criswell said.

She said people who do not have access to the internet or a phone can still get help registering or checking the status of their aid application from Disaster Survivor Assistance Teams on the ground.

There are also nonprofit organizations who can provide aid “to try to help stitch together the different funding sources that are available to help meet those needs that these families may have,” Criswell said.

Lujan Grisham agreed but said the federal aid is very limited, and the way that resources are identified is “a bit antiquated.”

“It’s not going to be enough,” she said.

She pointed to legislation in Congress intended to give direct aid to people who have lost livelihood and properties from the Hermits Peak-Calf Canyon Fire.

Still, the governor said it’s going to be difficult for people to be able to get those loans if, for example, they are a rancher who doesn’t know where they’re going to graze after the fires for the next 15 years.

“That design doesn’t apply all that well to these kinds of victims,” Lujan Grisham said. “I have great confidence that Congress is going to do the right thing here.”

State lawmakers could also identify resources to rebuild for the communities impacted by the fire, but she said she doesn’t know what that would look like exactly.

“They’re doing the maximum that’s available, but we want the feds to lean in more, given the prescribed burn aspect of this fire,” Lujan Grisham said. “And we expect the state to stand up for its own citizens, and it will.”

No end in sight

Tuesday was the 42nd day that the Hermits Peak-Calf Canyon combo fire has burned, and authorities said it’s likely to continue to burn through the summer.

“It’s nothing less than a miracle, honestly, that we have had so few injuries,” given the size of the fires, the terrain and the fuel loads, Moore-Merrel said.

“We do anticipate this being a very long summer, looking at — even now — into July, with the current fire system,” she said.

In southwestern New Mexico in Catron County on Friday night, there was a new start known as the Black Fire. That fire grew on Monday by more than 37,000 acres, McCarthy said. 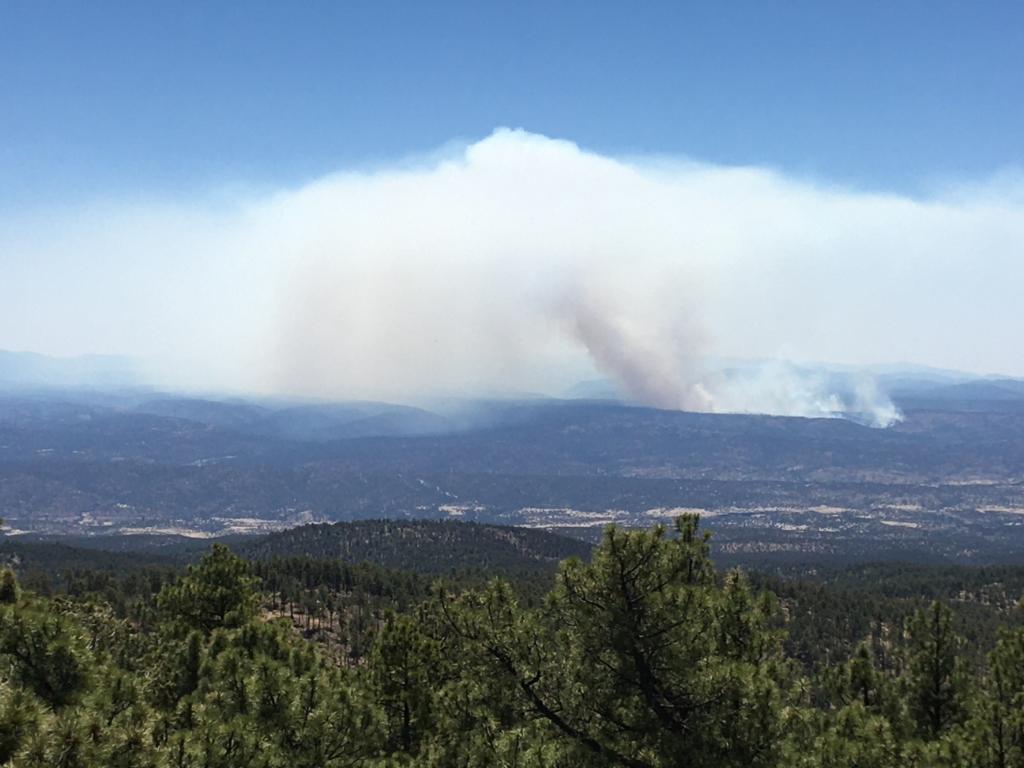 “That’s a very rapid rate of spread that is of extreme concern,” McCarthy said. There are 540 firefighters working on that blaze, she added.

The Cerro Pelado Fire in the Jemez Mountains is at 71% containment and did not grow on Tuesday, she said. That fire is burning in areas previously treated by thinning, and through old fire scars from 2011 and 1996.

McCarthy does not expect the Hermits Peak-Calf Canyon to let up any time soon with forecasts predicting little rain, strong winds and temperatures in the 90s that will impact the fire’s behavior.

I don’t want to give false hope that the massive Hermits Peak and Calf Canyon fire will be extinguished soon.

McCarthy said state officials are also preparing now for flooding from monsoon rains, which are expected by the beginning of July.

People in the disaster zone have words for Biden ahead of… by Shaun Griswold June 10, 2022
Summer hurricanes, wildfires and storms loom as FEMA faces… by Jennifer Shutt May 24, 2022
‘We’ve got to get gaming out of our blood’ by Mario Koran, Wisconsin Watch/WPR April 6, 2022