Educator ready to serve her first term in the Roundhouse

A political version of musical chairs concluded this week during a meeting of the Bernalillo County Commission, tasked with filling empty legislative seats over the last couple of months.

Democratic Rep. Flor Yanira Gurrola Valenzuela was surprised and honored, she said, to be selected Monday by the commission to fill the House seat in the N.M. Legislature left empty by former Rep. Antonio “Moe” Maestas.

Some expected commissioners to reappoint Marsella Duarte, who served the last 16 days of 2022 in the spot. Duarte is an elementary school teacher who has also worked in the Legislature as an aide and committee secretary.

But the commission — refreshed after November’s election with two new members who just took office — chose political newcomer Gurrola Valenzuela to represent District 16 on Albuquerque’s Westside for the next two years. D16 stretches between Montaño and Central on the north and south, and roughly the river and Unser on the east and west. 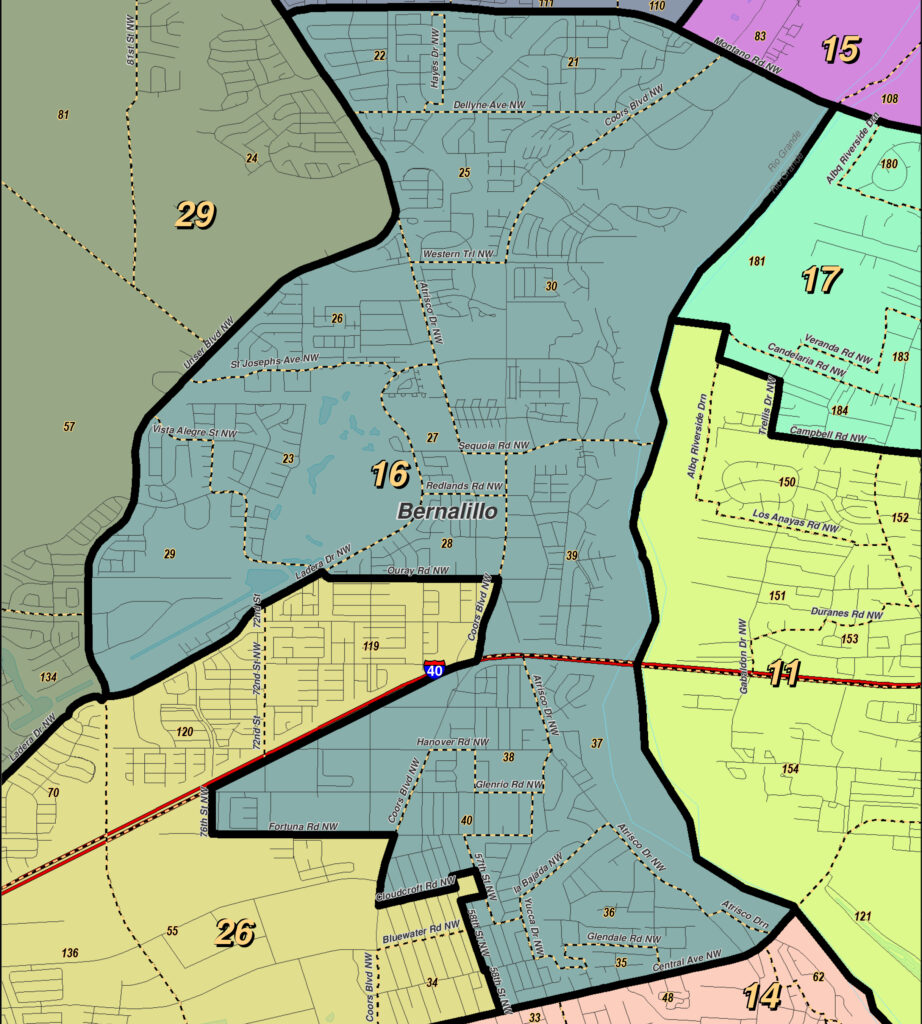 Her predecessor Maestas, who served in the House since 2007, was appointed to a state Senate seat in November by the commission after a bitter debate. Then-Sen. Jacob Candelaria had stepped down suddenly, saying he wanted to start a family.

After representing the area for 16 years, Maestas is probably somewhat familiar to its constituents. Gurrola Valenzuela didn’t campaign for the job and so hasn’t had a chance to introduce herself to her district in quite that way yet. But her record in education speaks for itself, she said, and plenty of people do know her work.

Appointed Monday and sworn in Tuesday, a week before the session starts, she’s doing her best to reach out farther than ever and connect quickly.

“I’m trying to be a part of every town hall that people invite me to,” she said. “I’m trying to meet with every community organization that is calling me.”

As a bilingual educator with the nonprofit Dual Language Education of New Mexico and former math teacher in Albuquerque Public Schools, she’s also trying to keep in mind what she used to tell students who would come to her and say, “I don’t know this.”

“It’s always, ‘You don’t know it yet,’” she emphasized, because she’s all about changing that mindset. “I’m very open. I love to learn. I don’t have free time right now because I’m only invested in this. So that’s how I’m getting ready.”

She said the organization she works for is supportive of her new position as a lawmaker and giving her time off to serve the state.

Gurrola Valenzuela moved to the U.S. from Chihuahua, Mexico, in 2000 and purchased a home in the district eight years later, records show.

She’s lived there for 14 years, so she said she has a decent understanding of what the area’s needs are. She will likely pursue some of the same priorities as Maestas, but because they come from different experiences, she added that there will likely be variations, too.

As to her focus, she’s passionate about education. It will always be a top concern, “and it is a priority in every district, especially in ours,” she said. “So making sure that the students have opportunities — not only at school and in the classroom, but definitely outside the classroom, too.”

Young people in her district need a safe place to go, she said. “It’s not easy to see the kids just hanging around, walking around the tracks, around the cars, because there is no place for them to hang out.”

At times, students have asked to speak to Gurrola Valenzuela outside of the classroom and shared things that are hard to hear about their lives beyond school. “And I know for teachers, it’s not enough just to listen,” she said. “We always try to do something about it.” Seeking resources for students, figuring out what’s available, that’s often an illuminating process, she said, and in some ways has helped her prepare for her role next week as a policymaker.

Gurrola Valenzuela is also thinking about elders on the Westside who need access to technology and transportation. She recalled a recent incident where a senior in a wheelchair was struggling to reach the bus stop. That kind of thing, she said, just shouldn’t happen. Gurrola Valenzuela stopped her car to help the person get to the stop, but doing so sparked a question for her about access to public transit, which she said will be another priority for her in her new position.

A registered Democrat in New Mexico since 2010, Gurrola Valenzuela said she’s found that she aligns with state party leadership about priorities and values heading into the session so far, especially around public school funding.

She said she would support a measure to preserve abortion rights in state law — a campaign promise by Gov. Michelle Lujan Grisham last year.

Democratic lawmakers, including Maestas, have been reaching out all week, Gurrola Valenzuela said, to let her know that she can ask them any questions when she heads to the Roundhouse in Santa Fe on Tuesday for the start of the session.

As a newcomer, if there’s one thing she wants the people she represents now to know, it’s this: “I’m here for the people,” she said. “We need to be there for one another, so as a society, as a community, we can grow and have a better opportunity for one another, for our kids.”

Educator ready to serve her first term in the Roundhouse