Residents of Albuquerque’s International District are lobbying legislators to merge their neighborhoods into a single political district, saying the current political map dilutes the power of an area that needs a unified voice to address its challenges.

Five residents have spoken at meetings of the Citizen Redistricting Committee in recent weeks, according to meeting minutes. Each has asked the citizen-led committee to draw maps that knit the neighborhood into a single district. 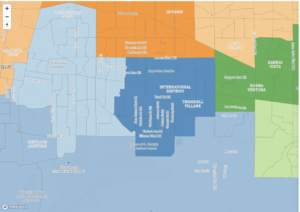 “So many times — we’re an older community, and we have been marginalized,” said Nancy Bearce, the Bernalillo County treasurer and neighborhood resident. “We have been left behind.”

The neighborhood in Southeast Albuquerque sits between San Mateo and Wyoming from west to east and Lomas and Gibson from north to south.

The area has some of the state’s highest poverty rates and worst health outcomes. The average household income in a census tract in the heart of the neighborhood is less than half that of the city’s; about one-third of children live in poverty; and the life expectancy is 67.9, the lowest in the city, according to census figures.

It’s also the state’s most diverse neighborhood, Bearce said. Students at nearby Highland High School speak 48 languages. And the area is where many Afghan refugees will be resettled.

The commission Wednesday released concept designs that show what the new political districts could look like, based on certain criteria — like the number of residents in each district and where certain racial or cultural communities are already based — and feedback from the community during the commission’s early meetings.

In 2011, the last time redistricting happened, neighborhood residents also lobbied to give the International District its own political district. Despite their efforts, the political boundaries still cut through the neighborhood.

The commission’s maps are the first concept maps to be produced as part of its recommendations. More meetings are occurring in the coming weeks, and the Legislature will also get to accept the maps or draw its own after the commission makes its proposals.

‘We’ve got to get gaming out of our blood’ by Mario Koran, Wisconsin Watch/WPR April 6, 2022
Straddling the divide between environmental action and… by Isabel Koyama February 28, 2022
Trump’s fake electors: Here’s the full list by Kira Lerner February 1, 2022