Same-day registration was expected this year because lawmakers in 2018 revamped the state’s election code in an effort to increase voter participation. 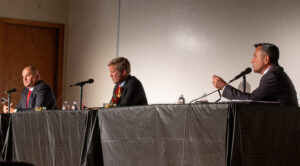 RELATED: Policing, racism and homelessness center stage in the 2021 mayoral election (Sept. 28, 2021)
Same-day voter registration measures are meant to address a long history of attacks on voting rights in the U.S. and make it easier for low-income folks and working people of color to vote.

Even in states where people’s voting rights are restored automatically upon release from prison, formerly incarcerated people still need re-register to vote, according to the National Conference on State Legislatures. The Prison Policy Initiative points to same-day voter registration as one of many solutions to make sure eligible voters are able to cast their ballots and reduce systemic inequities. People of color are incarcerated disproportionately because of racism within criminal legal systems nationwide, according to PPI.  Nearly half of the people behind the walls are Black or Latino, according to The Sentencing Project.

In New Mexico, people convicted of felonies can register to vote again if they are unconditionally discharged from prison, complete all of their parole or probation conditions or get their conviction overturned on an appeal.

New Mexico lawmakers tried to end felony disenfranchisement and make it so people convicted of felonies would not lose their voting rights and then have to re-register. House Bill 57 made its way through the Legislature two years ago, but the bill was watered down in committee and died before seeing a full vote in either chamber.

To find your nearest polling location that does offer same-day registration during the early voting period, enter your address or ZIP code here.

Know your rights as a New Mexico voter.