Women from the Michigan-based victim advocacy groups End Violent Encounters and Firecracker Foundation cheer for women as they leave the courthouse after the sentencing of disgraced doctor Larry Nassar in Ingham County Circuit Court. (Photo by Anthony Lanzilote / Getty Images)

A call to action by a coalition seeking to end sexual assault in New Mexico is taking shape in Santa Fe.

IsaBella Thomas wants her school to adopt affirmative consent policies to establish the foundation that sexual activity must be OK with everyone taking part. On Friday, she will lead students from The New Mexico School for the Arts in a march several blocks south toward the state capital. The rally is meant to support assault survivors and amplify legislation that would bring affirmative consent into high schools and higher education institutions. 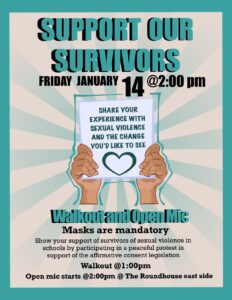 The Support Our Survivors movement — S.O.S. for short — demands affirmative consent measures “so that we can finally feel safe at school,” she said.

“We deserve to feel safe in our learning environment and our communities,” she added.

The event at the Roundhouse is expected to start at 2 p.m. Thomas is calling for students from all schools in Santa Fe to walk out and join the peaceful protest. She said there will be an open mic for survivors to share their experiences.

House Bill 44 was pre-filed last week by Rep. Liz Thomson. She is asking Gov. Michelle Lujan Grisham to give this legislation a chance to be debated and voted on during the upcoming 30-day legislative session, which is usually reserved for budget matters and issues the governor OKs.

“The bottom line is we’re trying to lay down ground rules for our youth so that everybody knows what’s OK,” Thomson said. “Being passed out is not consent. Being too drunk is not consent.”

Monday’s news conference on Zoom was organized by the New Mexico Coalition of Sexual Assault Programs. The group is made up of advocates and agencies that provide multiple avenues of support for people who experience sexual assault.

The coalition is seeking $5 million from the state to fund programs run by service providers, children’s advocacy centers and nurses who examine  sexual assault victims. The group is also seeking money to launch a statewide hotline for tribal communities, and additional services for Indigenous people.

Straddling the divide between environmental action and… by Isabel Koyama February 28, 2022
Misogyny is fueling the country’s gun violence epidemic,… by Anna Gustafson, Michigan Advance July 22, 2022
Memory of a River: In another hot year, we fail the Rio… by Laura Paskus September 18, 2021